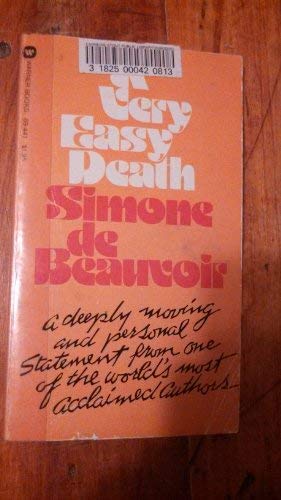 When her mother was in the hospital with terminal cancer, Simone had time to reminisce about her mother's early life, as Simone and her sister, Poupette, prepared to face the decision of whether to prolong a life when it is full of suffering. Like most people, they believed that it would be better to die than to continue to suffer, but their mother had a very different view of the matter. Francoise de Beauvoir had finally found happiness in her life, and she truly believed she could find happiness in her own suffering. Considered by many to be the master work by Simone de Beauvoir, A Very Easy Death focuses on death and the other limitations in one's life and with what attitude one approaches them. Through her mother's beauty, her smile, and her pride in her life and in herself, Simone learned that to be human and to have individual choice are the most important aspects of existence.

A poignant account of her mother's death from cancer.

Simon de Beauvoir (1908-1986) was a French writer and intellectual whose works played an important role in the feminist movement. The main idea underlying all of her writing was the idea of freedom, not only for women but also for each individual, which for her necessarily entailed the idea of responsibility.