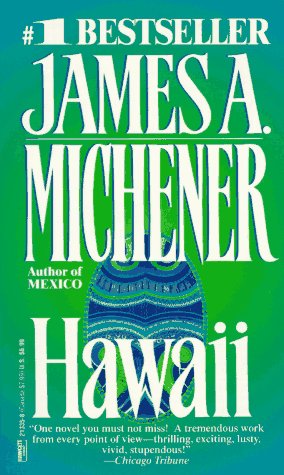 "[A] mammoth epic of the islands, [a] vast panorama, wonderful."
THE BALTIMORE SUN
America's preeminent storyteller, James Michener, introduced an entire generation of readers to a lush, exotic world in the Pacific with this classic novel. But it is also a novel about people, people of strength and character; the Polynesians; the fragile missionaries; the Chinese, Japanese, and Filipinos who intermarried into a beautiful race called Hawaiians. Here is the story of their relationships, toils, and successes, their strong aristocratic kings and queens and struggling farmers, all of it enchanting and very real in this almost mythical place.

From the Back Cover:
"[A] mammoth epic of the islands, [a] vast panorama, wonderful."
THE BALTIMORE SUN
From the Paperback edition.
About the Author:
James A. Michener was one of the world’s most popular writers, the author of more than forty books of fiction and nonfiction, including the Pulitzer Prize–winning Tales of the South Pacific, the bestselling novels The Source, Hawaii, Alaska, Chesapeake, Centennial, Texas, Caribbean, and Caravans, and the memoir The World Is My Home. Michener served on the advisory council to NASA and the International Broadcast Board, which oversees the Voice of America. Among dozens of awards and honors, he received America’s highest civilian award, the Presidential Medal of Freedom, in 1977, and an award from the President’s Committee on the Arts and Humanities in 1983 for his commitment to art in America. Michener died in 1997 at the age of ninety.