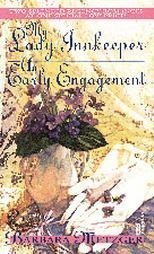 MY LADY INNKEEPER
"An attractive, sharp-tongued heroine."
--Kirkus Reviews
Though Miss Lyndell Markham's ne'er-do-well stepbrother took her money and bought a tawdry inn, Jasper Riddlex was hardly a spy worthy of the gallows! So Lyndell decides to disguise herself as the new innkeeper and trap the traitor herself. But her newest guest, the Marquis of Cheyne--war hero, ladies' man, and general rogue about the town--could ruin Lyndell if he knew her identity. And surely she was too smart to succumb to his seductive embrace. . . .

AN EARLY ENGAGEMENT
"A delightful tale."
--Affaire de Coeur
Though spirited and quite independent, Lady Emilyann insists that Major Lord Stokely honor the betrothal arrangement their fathers had made years before. And he sees no reason not to marry the scrawny, rather plain young woman. Yet while her new husband is away at battle, Lady Em blossoms from ragamuffin to beauty and becomes the toast of the town. So upon his return from the wars, the major discovers he has yet another battle to win--for the heart of his lovely wife!