Items related to The Coup 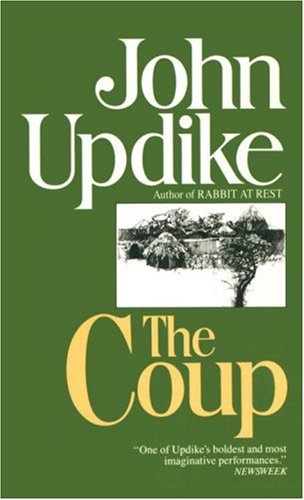 The Coup describes violent events in the imaginary African nation of Kush, a large, landlocked, drought-ridden, sub-Saharan country led by Colonel Hakim Félix Ellelloû. (“A leader,” writes Colonel Ellelloû, “is one who, out of madness or goodness, takes upon himself the woe of a people. There are few men so foolish.”) Colonel Ellelloû has four wives, a silver Mercedes, and a fanatic aversion—cultural, ideological, and personal—to the United States. But the U.S. keeps creeping into Kush, and the repercussions of this incursion constitute the events of the novel. Colonel Ellelloû tells his own story—always elegantly, and often in the third person—from an undisclosed location in the South of France.
From the Trade Paperback edition.

Couples is the book that has been assailed for its complete frankness and praised as an artful, seductive, savagely graphic portrait of love, marriage, and adultery in America. But be it damned or hailed, Couples drew back the curtain forever on sex in suburbia in the late twentieth century. A classic, it is one of those books that will be read -- and remembered -- for a long time to come.

Book Description Condition: New. John Updike is one of America's most versatile men of letters. His characterization of Rabbit Angstrom in Rabbit Run, Rabbit Redux and Rabbit is rich has made the author richer than Rabbit. But in 'The Coup', Updike dissects a modern African state called. Seller Inventory # 9780449242599