Items related to The Boys of Summer (Signet)

The Boys of Summer (Signet) 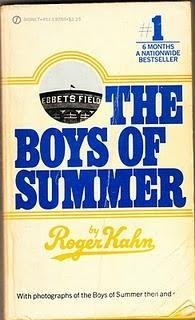 This book was digitized and reprinted from the collections of the University of California Libraries. It was produced from digital images created through the libraries’ mass digitization efforts. The digital images were cleaned and prepared for printing through automated processes. Despite the cleaning process, occasional flaws may still be present that were part of the original work itself, or introduced during digitization. This book and hundreds of thousands of others can be found online in the HathiTrust Digital Library at www.hathitrust.org.

"At a point in life when one is through with boyhood, but has not yet discovered how to be a man, it was my fortune to travel with the most marvelously appealing of teams." Sentimental because it holds such promise, and bittersweet because that promise is past, the first sentence of this masterpiece of sporting literature, first published in the early '70s, sets its tone. What follows only gets better, deeper, more sentimental, and more bittersweet. The team, of course, is the mid-20th-century Brooklyn Dodgers, the team of Robinson and Snyder and Hodges and Reese, a team of great triumph and historical import composed of men whose fragile lives were filled with dignity and pathos. Roger Kahn, who covered that team for the New York Herald Tribune, makes understandable humans of his heroes as he chronicles the dreams and exploits of their young lives, beautifully intertwining them with his own, then recounts how so many of those sweet dreams curdled as the body of these once shining stars grew rusty with age and battered by experience. It is the rare sports book that cannot be contained by the limitations of its genre; it is equal parts journalism, memoir, social history, and poetry.

Roger Kahn is the award-winning author of The Boys of Summer, the classic bestseller about Jackie Robinson, the Dodgers and growing up in Brooklyn. He is the author of many other books whose subjects range from baseball to political activism, including Joe & Marilyn: A Memory of Love about the courtship and marriage of Joe DiMaggio and Marilyn Monroe and A Flame of Pure Fire, A New York Times Notable Book of the Year 1999 about boxing great Jack Dempsey.

1. The Boys of Summer (Signet)