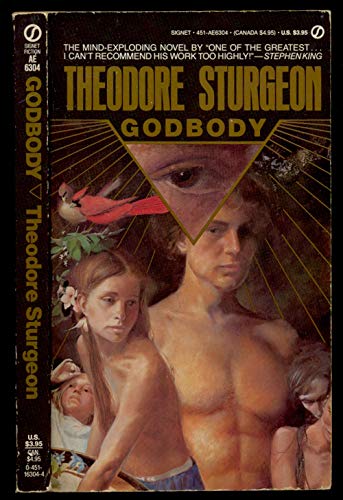 A charismatic, Christ-like figure--Godbody--appears in the midst of a small American town and transforms the lives of a select few

When Sturgeon died, in May of last year, he left behind an ouevre that included some of the best stories and novels in the science fiction genre. His later work was weak, however, and this last novel demonstrates the author at both his best and worst. The plot is skimpy, the characterizations virtually nonexistent, but this short novel is written with an energy and conviction that make it absorbing. The story concerns a Christlike being named Godbody who suddenly appears in a small town with a message of loveas sacred, life-affirming, the salvation of the individual and the worldwhich he is able to communicate merely by touching a person. Inevitably, his message is too threatening, and he is murdered, but not before he has opened the minds and hearts of several people, who will now go off to live a new, revolutionary life. Even as he unfolds his story in expert fashion, Sturgeon is able to express his passion, and the book is capable of moving the reader. Robert Heinlein has contributed a foreword and Stephen Donaldson an afterword, and both have interesting, perceptive things to say about Sturgeon. Paperback rights to NAL; Science Fiction Book Club alternate.
Copyright 1986 Reed Business Information, Inc.

Book Description Condition: Good. A+ Customer service! Satisfaction Guaranteed! Book is in Used-Good condition. Pages and cover are clean and intact. Used items may not include supplementary materials such as CDs or access codes. May show signs of minor shelf wear and contain limited notes and highlighting. Seller Inventory # 0451163044-2-4