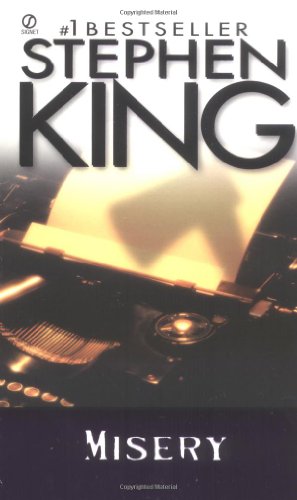 Paul Sheldon. He’s a bestselling novelist who has finally met his biggest fan. Her name is Annie Wilkes and she is more than a rabid reader—she is Paul’s nurse, tending his shattered body after an automobile accident. But she is also his captor, keeping him prisoner in her isolated house.

Now Annie wants Paul to write his greatest work—just for her. She has a lot of ways to spur him on. One is a needle. Another is an ax. And if they don’t work, she can get really nasty.

In Misery (1987), as in The Shining (1977), a writer is trapped in an evil house during a Colorado winter. Each novel bristles with claustrophobia, stinging insects, and the threat of a lethal explosion. Each is about a writer faced with the dominating monster of his unpredictable muse.

Paul Sheldon, the hero of Misery, sees himself as a caged parrot who must return to Africa in order to be free. Thus, in the novel within a novel, the romance novel that his mad captor-nurse, Annie Wilkes, forces him to write, he goes to Africa--a mysterious continent that evokes for him the frightening, implacable solidity of a woman's (Annie's) body. The manuscript fragments he produces tell of a great Bee Goddess, an African queen reminiscent of H. Rider Haggard's She.

He hates her, he fears her, he wants to kill her; but all the same he needs her power. Annie Wilkes literally breathes life into him.

Misery touches on several large themes: the state of possession by an evil being, the idea that art is an act in which the artist willingly becomes captive, the tortured condition of being a writer, and the fears attendant to becoming a "brand-name" bestselling author with legions of zealous fans. And yet it's a tight, highly resonant echo chamber of a book--one of King's shortest, and best novels ever. --Fiona Webster