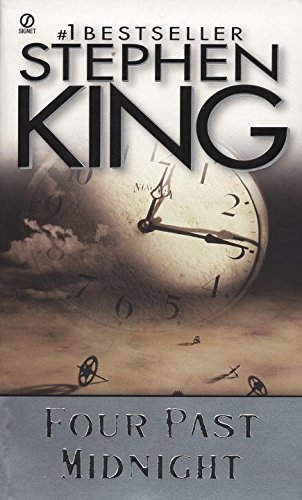 THE LANGOLIERS
You are strapped in an airplane seat on a flight beyond hell.

SECRET WINDOW, SECRET GARDEN
You are trapped in the demonic depths of a writer’s worst nightmare.

THE LIBRARY POLICEMAN
You are forced into a hunt for the most horrifying secret a small town ever hid.

THE SUN DOG
You are focusing in on a beast bent on shredding your sanity.

You are in the hands of Stephen King at his mind-blowing best, with an extraordinary quartet of full-length novellas.

Stephen King stretches this short story into a novella. A young boy gets a mysterious Polaroid camera that only takes pictures of a mean dog. The magic camera is creating a portal so that the mean dog can come to Earth and eat people. The boy stops him. The end. The book is saved by narrator Tim Sample's relentless efforts to wring suspense from the many scenes that are not suspenseful, just drawn out descriptions of mundane things. Sample speaks urgently at the right times, but sometimes even that--combined with suspenseful music--isn't enough. King's novella would benefit from a brutal editor hacking away the nonessentials. It's one of his lesser works. M.S. © AudioFile 2009, Portland, Maine

Book Description Paperback. Condition: New. New - Unread - With Minor Shelf Wear To The Edges. - For More Information On Condition. - Please See All Photos. - You Are Strapped In An Airline Seat On A Flight Beyond Hell. You Are Forced Into A Hunt For The Most Horrifying Secret A Small Town Ever Hid. You Are Trapped In The Demonic Depths Of A Writer's Worst Nightmare. You Are Focusing In On A Beast Bent On Shredding Your Sanity. You Are In The Hands Of Stephen King At His Mind-Blowing Best With An Extraordinary Quartet Of Full-Length Novellas Guaranteed To Set Your Heart-Stopwatch At--Four Past Midnight. Seller Inventory # 004709

Book Description Soft cover. Condition: New. ANON (illustrator). MASS MARKET PAPERBACK. CONDITION: NEW Four Past Midnight is a collection of novellas written by Stephen King in 1988 and 1989 and published in August 1990.[1] It is his second book of this type, the first one being Different Seasons. The collection won the Bram Stoker Award in 1990 for Best Collection[2] and was nominated for a Locus Award in 1991.[3] In the introduction, King says that, while a collection of four novellas like Different Seasons, this book is more strictly horror with elements of the supernatural.[4]. Seller Inventory # BB10R13_00596