Items related to Shroud for the Archbishop (Sister Fidelma Mysteries) 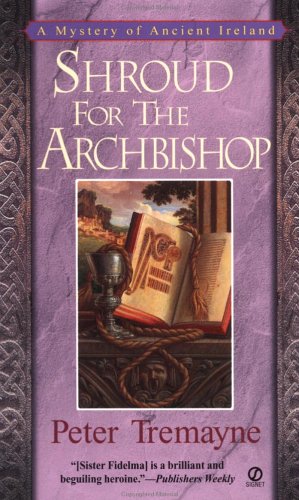 The second installment of the series set in medieval Ireland finds Celtic nun Sister Fidelma investigating the brutal death of Wighard, Archbishop Designate of Canterbury, a case that leads her into the thick of the world's religious conflict. Reprint.

About the Author:
Peter Tremayne is the pseudonym for Peter Berresford Ellis, a well-respected authority on the ancient Celts. He is the author of over twenty books, including The Dictionary of Celtic Mythology, The Celtic Dawn: A History of Pan Celticism, and The Druids. Valley of the Shadow is the sixth Sister Fidelma mystery. Tremayne lives in London, England.
From Kirkus Reviews:
A second chapter in the seventh-century exploits of intelligent, highly educated Sister Fidelma of the Celtic Church in Ireland, aided as before by Brother Eadulf of Canterbury (Absolution by Murder, 1996). The two have traveled to Rome, where Fidelma is to deliver messages to His Holiness and where Eadulf will serve as scribe to archbishop-designate Wighard of Canterbury, the guest of Bishop Gelasius at Lateran Palace. Among the many pilgrims in the city to witness Wighard's ordination are Abbott Puttoc of Saxony, an ambitious libertine, and haughty Abbess Wulfrun and her companion-servant Sister Eafa of Kent. Before the ceremony can take place, though, Wighard is found strangled in his quarters, and Irish monk Ronan Ragallach is accused of the killing but escapes his captors. Not completely convinced of Ronan's guilt, and aware of Fidelma and Eadulf's previous successes, Bishop Gelasius asks their help and assigns soldier Licinius to ease their way. As Fidelma goes about the tedious questioning of everyone in the vicinity at the crucial time, the body count begins to mount and various intricate plots are uncovered. In the end, though, Fidelma finds the answer to their quest rooted in the heinous crimes of the not-so-distant past. The author's passion for the period results in an unrelenting stream of information--on Church theology, hierarchy, politics, rituals and residences, to say nothing of chapels and catacombs. The diffuse plotting, rarely compelling, suffocates under the onslaught. -- Copyright ©1996, Kirkus Associates, LP. All rights reserved.