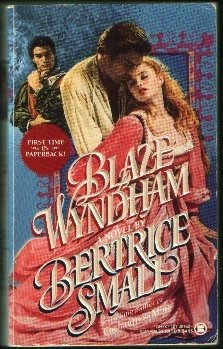 The beautiful eldest daughter of Lord Morgan weds, for expediency, the Earl of Langford, and finds herself attracted to the Earl's handsome nephew and the object of King Henry VIII's interest

Bertrice Smallhas written thirty novels of historical romance and two erotic novellas. She is a New York Times bestselling author and the recipient of numerous awards. In keeping with her profession, Bertrice Small lives in the oldest English-speaking town in the state of New York, founded in 1640. Her light-filled studio includes the paintings of her favorite cover artist, Elaine Duillo, and a large library—but no computer as she works on an IBM Quietwriter 7. Her longtime assistant, Judy Walker, types the final draft. Because she believes in happy endings, Bertrice Small has been married to the same man, her hero, George, for thirty-eight years. They have a son, Thomas, a daughter-in-law, Megan, and two adorable grandchildren, Chandler David and Cora Alexandra. Longtime readers will be happy to know that Nicki the Cockatiel flourishes along with his fellow housemates, Pookie, the long-haired greige and white, Honeybun, the petite orange lady cat with the cream-colored paws, and Finnegan, the black long-haired baby of the family, who is almost two.

Blaze's tumultuous tale opens in 1521 England with Henry VIII and Catherine of Aragon on the throne. When 15-year-old Blaze marries the Earl of Langford, she eases the concern her father, Lord Robert Morgan, must feel about securing dowries for his eight daughters. When the earl dies suddenly, Blaze visits her sister in London, where she attracts the king's notice and becomes his unwilling mistress. When Henry succumbs to Anne Boleyn's charms, he marries off Blaze to her first husband's nephew, Tony, with whom she falls in love almost against her will. Small's fans in paperback (this is her first novel in hardcover) know what to expect: lots of sex and a good story. Doubleday Book Club alternate. Andrea Lee Shuey, Dallas P.L.
Copyright 1988 Reed Business Information, Inc.