Items related to Give Me a Fast Ship: The Continental Navy and America's...

McGrath, Tim Give Me a Fast Ship: The Continental Navy and America's Revolution at Sea

Give Me a Fast Ship: The Continental Navy and America's Revolution at Sea 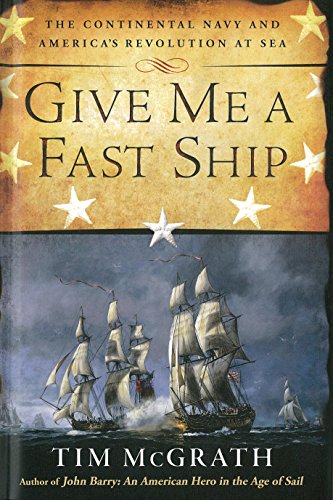 Five ships against hundreds—the fledgling American Navy versus the greatest naval force the world had ever seen.

America in 1775 was on the verge of revolution—or, more likely, disastrous defeat. After the bloodshed at Lexington and Concord, England’s King George sent hundreds of ships westward to bottle up American harbors and prey on American shipping. Colonists had no force to defend their coastline and waterways until John Adams of Massachusetts proposed a bold solution: The Continental Congress should raise a navy.

The idea was mad. The Royal Navy was the mightiest floating arsenal in history, with a seemingly endless supply of vessels. More than a hundred of these were massive “ships of the line,” bristling with up to a hundred high-powered cannon that could level a city. The British were confident that His Majesty’s warships would quickly bring the rebellious colonials to their knees.

They were wrong. Beginning with five converted merchantmen, America’s sailors became formidable warriors, matching their wits, skills, and courage against the best of the British fleet. Victories off American shores gave the patriots hope—victories led by captains such as John Barry, the fiery Irish-born giant; fearless Nicholas Biddle, who stared down an armed mutineer; and James Nicholson, the underachiever who finally redeemed himself with an inspiring display of coolness and bravery. Meanwhile, along the British coastline, daring raids by handsome, cocksure John Paul Jones and the “Dunkirk Pirate,” Gustavus Conyngham—who was captured and sentenced to hang but tunneled under his cell and escaped to fight again—sent fear throughout England. The adventures of these men and others on both sides of the struggle rival anything from Horatio Hornblower or Lucky Jack Aubrey. In the end, these rebel sailors, from the quarterdeck to the forecastle, contributed greatly to American independence.

Meticulously researched and masterfully told, Give Me a Fast Ship is a rousing, epic tale of war on the high seas—and the definitive history of the American Navy during the Revolutionary War.

Tim McGrath is the author of the critically acclaimed biography John Barry: An American Hero in the Age of Sail. An avid sailor, McGrath has published articles in Naval History magazine. He has twice won the Commodore John Barry Book Award for his contribution to maritime literature, and has been a finalist for the Samuel Eliot Morison Award for Naval Literature.

"Give Me a Fast Ship is an exhaustively researched and fluently rendered account of the first incarnation of the American navy.  In telling this fascinating and sprawling tale, Tim McGrath never loses sight of the human dimension of his subject...McGrath has mined archival sources that have been largely neglected in previous histories. The result is a thoroughly readable history of an integral aspect of the campaign for American independence."
--Ian W. Toll, author of Six Frigates: The Epic History of the Founding of the U.S. Navy


McGrath has a seafarer's grasp of tactics and is a good storyteller, particularly as he weaves together the character of ships and the personalities of their captains. But it is in descriptions of the running battles at sea that he really shines, something he proves beyond doubt when recounting the well-known story of John Paul Jones. We all know the outcome, yet McGrath keeps us transfixed on the action even as we await the fiery words we know by heart: "I have not yet begun to fight."
-- Washington Post

Give Me a Fast Ship goes beyond a "spotlight" treatment of major events, offering instead a series of mini-stories that illuminate the nitty-gritty of colonial America's desperate struggle at sea.
-- Modern History Quarterly

"Important themes are woven through the scores of separate stories related by McGrath. One of the most important has to do with the often troublesome working relationships between the Continental Navy captains and their civilian leaders."
--Rear Admiral Joseph F. Callo (Ret.), author of John Paul Jones: America's First Sea Warrior.

"Blending exhaustive research and rousing storytelling, McGrath has created a distinguished work of scholarship that grabs the reader like a Patrick O'Brian novel."
-- Naval History Magazine

1. Give Me a Fast Ship: The Continental Navy and America's Revolution at Sea

2. Give Me a Fast Ship: The Continental Navy and America's Revolution at Sea

3. Give Me a Fast Ship: The Continental Navy and America's Revolution at Sea