Items related to The Peshawar Lancers 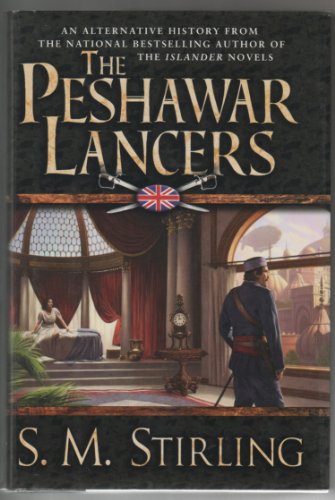 On an alternate Earth irrevocably transformed by a violent spray of comets in the 1870s, the planet is controlled by two superpowers--the British Empire and Russia--who appear to be heading for a deadly showdown, unless superspy Captain Alfred King can stop it. By the author of On the Oceans of Eternity.

S. M. Stirling is the author of numerous science fiction and fantasy novels, including the popular Nantucket series that began with Island in the Sea of Time.

Aimed at readers who thrill to King, Empire and the fluttering Union Jack, as well as to brave white heroes, their faithful dusky-skinned servants and sneering villains, this alternative history from the bestselling author of the Islander novels supposes that in 1878 "a series of high-velocity heavenly bodies struck the earth," wreaking havoc throughout Europe and North America. Because much of the British merchant fleet survived the "Fall," the English upper classes were able to escape to the Asian subcontinent. As a result, the British raj, extending from Delhi through India, Afghanistan and the Kashmir, still exists in the 21st century, though the technology consists of 19th-century vintage railways, hydrogen airships and a turbine-powered building-sized "Engine," the equivalent of a computer. It's a nifty premise, but in trying to continue in the grand tradition of such adventure writers as Kipling, Lamb and Mundy, whom Stirling acknowledges as influences, the author fails to inject much life into his stock characters, from the heroic Captain Athelstane King of the Lancers and the captain's memsahib sister, Cassandra, to King's Sikh companion, his trusty Muslim servant and the inevitable wise and helpful Jew. Unfortunately, this is less history altered than simply stopped, and the story is wordy pastiche rather than active inspiration. Not without humor, appendices survey the worldwide consequences of the Fall, complete with the succession of British monarchs from Victoria on. (Jan. 8)Forecast: Given recent events in Peshawar and the Northwest Frontier area, this novel is bound to attract more than usual attention. But since its tone is so at odds with today's grim reality, it may be considered by some in dubious taste.