Items related to Nectar in a Sieve (Signet Classics)

Nectar in a Sieve (Signet Classics) 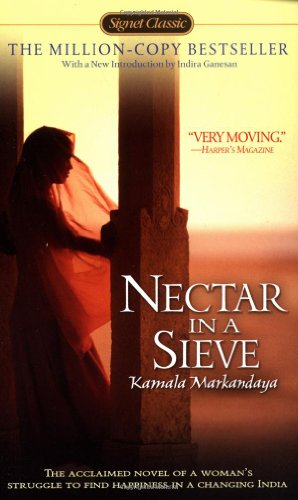 Featuring a new introduction, this critically acclaimed novel tells the story of India and its people through the eyes of one woman and her experiences in one peasant family in a primitive Indian village. Reissue.

Kamala Markandaya (1924 - May 16, 2004) was a pseudonym used by Kamala Purnaiya Taylor, an Indian novelist and journalist. A native of Mysore, India, Markandaya was a graduate of Madras University, and afterwards published several short stories in Indian newspapers. After India declared its independence, Markandaya moved to Britain, though she still labeled herself an Indian expatriate long afterwards.

Rukmani, a peasant from a village in India, lives a life of constant struggle, yet she is a source of strength for many. At age twelve she marries a man she has never met and moves with him to his rented farmland. Over the years their marriage fills with love, mutual respect, and children: one daughter and many sons. A tannery built near their village forever alters Rukmani's life, for the tannery takes away farmland and silence, and while it provides jobs, they come with great costs. The changes in village life from an agricultural to an industrial community frighten Rukmani; her life becomes one of "Hope and fear. Twin forces that tugged at us first in one direction and then in another...Fear, constant companion of the peasant. Hunger, ever present to jog his elbow should he relax. Despair, ready to engulf him should he falter." Kenny, a white doctor in Rukmani's village, watches with a palpable foreboding his patients' daily struggle to survive. He leaves the village suddenly and often, and just as suddenly reappears, as if life there is too much for him yet he can't stay away. Rukmani and Kenny's conversations make apparent their individual and shared suffering, and while their experiences of the world are completely different, their friendship is based on respect and mutual reliance. Nectar In A Sieve is a powerful, depressing, but ultimately hopeful novel of a life lived with love, faith, and inner strength. -- For great reviews of books for girls, check out Let's Hear It for the Girls: 375 Great Books for Readers 2-14. -- From 500 Great Books by Women; review by Holly Smith

1. Nectar in a Sieve (Signet Classics)

2. Nectar in a Sieve (Signet Classics)

Book Description Condition: New. Featuring a new introduction, this critically acclaimed novel tells the story of India and its people through the eyes of one woman and her experiences in one peasant family in a primitive Indian village. Married as a child bride to a tenant farmer she had never seen, she worked side by side in the field with her husband to wrest a living from the land that was ravaged by droughts, monsoons, and insects. With remarkable fortitude and courage, she sought to meet changing times and fight poverty and disaster. She saw one of her infants die from starvation, her daughter becomes a prostitute, and her sons leave the land for jobs which she distrusted. And, somehow, she survived. This beautiful and eloquent story tells of a simple peasant woman in a primitive village in India whose whole life was a gallant and persistent battle to care for those she loved-an unforgettable novel that will wring your heart out. Seller Inventory # 9780451528230

4. Nectar in a Sieve (Signet Classics)

6. NECTAR IN A SIEVE (SIGNET CLASSI