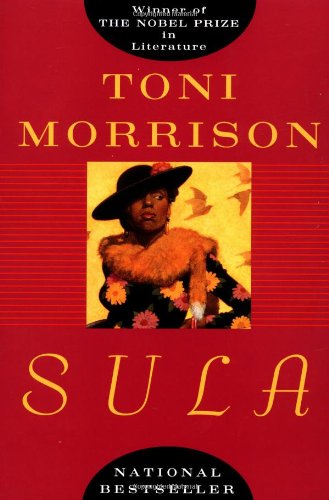 Amazon.com Review: In Sula, Toni Morrison, winner of the 1993 Nobel Prize for literature, tells the story of two women--friends since childhood, separated in young adulthood, and reunited as grown women. Nel Wright grows up to become a wife and mother, happy to remain in her hometown of Medallion, Ohio. Sula Peace leaves Medallion to experience college, men, and life in the big city, an exceptional choice for a black woman to make in the late 1920s. As girls, Nel and Sula are the best of friends, only children who find in each other a kindred spirit to share in each girl's loneliness and imagination. When they meet again as adults, it's clear that Nel has chosen a life of acceptance and accommodation, while Sula must fight to defend her seemingly unconventional choices and beliefs. But regardless of the physical and emotional distance that threatens this extraordinary friendship, the bond between the women remains unbreakable: "Her old friend had come home.... Sula, whose past she had lived through and with whom the present was a constant sharing of perceptions. Talking to Sula had always been a conversation with herself." Lyrical and gripping, Sula is an honest look at the power of friendship amid a backdrop of family, love, race, and the human condition. --Gisele Toueg

"Toni Morrison's speaking voice contains the same musicality as her prose, and the combination of the two results in a nearly sublime experience."
- The Chicago Tribune

". . . it's a storyteller's voice - older than sound recording, older even than print itself."
-The Trenton Times

"Morrison's remarkable talent for storytelling naturally lends itself to the spoken word."
- The Arizona Republic

Toni Morrison's first novel, The Bluest Eye (1970), was acclaimed as the work of an important talent, written--as John Leonard said in "The New York Times--in a prose "so precise, so faithful to speech and so charged with pain and wonder that the novel becomes poetry."
Sula has the same power, the same beauty.
At its center--a friendship between two women, a friendship whose intensity first sustains, then injures. Sula and Nel--both black, both smart, both poor, raised in a small Ohio town--meet when they are twelve, wishbone thin and dreaming of princes.
Through their girlhood years they share everything--perceptions, judgments, yearnings, secrets, even crime--until Sula gets out, out of the Bottom, the hilltop neighborhood where beneath the sporting life of the men hanging around the place in headrags and soft felt hats there hides a fierce resentment at failed crops, lost jobs, thieving insurance men, bug-ridden flour...at the invisible line that cannot be overstepped.
Sula leaps it and roams the cities of America for ten years. Then she returns to the town, to her friend. But Nel is a wife now, settled with her man and her three children. She belongs. She accommodates to the Bottom, where you avoid the hand of God by getting in it, by staying "upright, helping out at church suppers, asking after folks--where you deal with evil by surviving it.
Not Sula. As willing to feel pain as to give pain, she can never accommodate. Nel can't understand her any more, and the others never did. Sula scares them. Mention her now, and they recall that she put her grandma in an old folks' home (the old lady who let a train take her leg for the insurance)...that a child drowned inthe river years ago...that there was a plague of robins when she first returned...
In clear, dark, resonant language, Toni Morrison brilliantly evokes not only a bond between two lives, but the harsh, loveless, ultimately mad world in which that bond is destroyed, the world of the Bottom and its people, through forty years, up to the time of their bewildered realization that even more than they feared Sula, their pariah, they needed her.