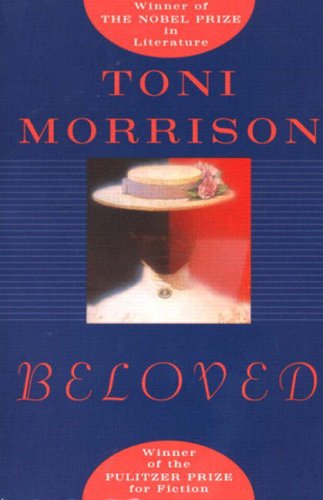 Sethe, an escaped slave living in post-Civil War Ohio with her daughter and mother-in-law, is persistantly haunted by the ghost of her dead baby girl

In the troubled years following the Civil War, the spirit of a murdered child haunts the Ohio home of a former slave. This angry, destructive ghost breaks mirrors, leaves its fingerprints in cake icing, and generally makes life difficult for Sethe and her family; nevertheless, the woman finds the haunting oddly comforting for the spirit is that of her own dead baby, never named, thought of only as Beloved.

A dead child, a runaway slave, a terrible secret--these are the central concerns of Toni Morrison's Pulitzer Prize-winning Beloved. Morrison, a Nobel laureate, has written many fine novels, including Song of Solomon, The Bluest Eye, and Paradise--but Beloved is arguably her best. To modern readers, antebellum slavery is a subject so familiar that it is almost impossible to render its horrors in a way that seems neither clichéd nor melodramatic. Rapes, beatings, murders, and mutilations are recounted here, but they belong to characters so precisely drawn that the tragedy remains individual, terrifying to us because it is terrifying to the sufferer. And Morrison is master of the telling detail: in the bit, for example, a punishing piece of headgear used to discipline recalcitrant slaves, she manages to encapsulate all of slavery's many cruelties into one apt symbol--a device that deprives its wearer of speech. "Days after it was taken out, goose fat was rubbed on the corners of the mouth but nothing to soothe the tongue or take the wildness out of the eye." Most importantly, the language here, while often lyrical, is never overheated. Even as she recalls the cruelties visited upon her while a slave, Sethe is evocative without being overemotional: "Add my husband to it, watching, above me in the loft--hiding close by--the one place he thought no one would look for him, looking down on what I couldn't look at at all. And not stopping them--looking and letting it happen.... And if he was that broken then, then he is also and certainly dead now." Even the supernatural is treated as an ordinary fact of life: "Not a house in the country ain't packed to its rafters with some dead Negro's grief. We lucky this ghost is a baby," comments Sethe's mother-in-law.

Beloved is a dense, complex novel that yields up its secrets one by one. As Morrison takes us deeper into Sethe's history and her memories, the horrifying circumstances of her baby's death start to make terrible sense. And as past meets present in the shape of a mysterious young woman about the same age as Sethe's daughter would have been, the narrative builds inexorably to its powerful, painful conclusion. Beloved may well be the defining novel of slavery in America, the one that all others will be measured by. --Alix Wilber

Toni Morrison's magnificent Pulitzer Prize-winning novel--first published in 1987--brought the unimaginable experience of slavery into the literature of our time and into our comprehension. Set in post-Civil War Ohio, it is the story of Sethe, an escaped slave who has risked her life in order to wrench herself from a living death; who has lost a husband and buried a child; who has borne the unthinkable and not gone mad. Sethe, who now lives in a small house on the edge of town with her daughter, Denver, her mother-in-law, Baby Suggs, and a disturbing, mesmerizing apparition who calls herself Beloved.

Sethe works at "beating back the past," but it makes itself heard and felt incessantly: in her memory; in Denver's fear of the world outside the house; in the sadness that consumes Baby Suggs; in the arrival of Paul D, a fellow former slave; and, most powerfully, in Beloved, whose childhood belongs to the hideous logic of slavery and who has now come from the "place over there" to claim retribution for what she lost and for what was taken from her. Sethe's struggle to keep Beloved from gaining possession of her present--and to throw off the long-dark legacy of her past--is at the center of this spellbinding novel. But it also moves beyond its particulars, combining imagination and the vision of legend with the unassailable truths of history.
Upon the original publication of Beloved, John Leonard wrote in the Los Angeles Times: "I can't imagine American literature without it." In fact, more than a decade later, it remains a preeminent novel of our time, speaking with timeless clarity and power to our experience as a nation with a past of both abominable and ennobling circumstance.
From the Hardcover edition.