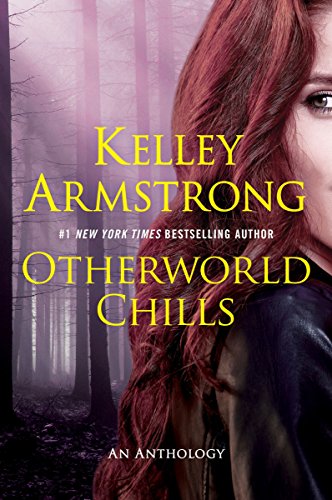 About the Author:
KELLEY ARMSTRONG is the #1 New York Times bestselling author of the Otherworld series, as well as the New York Times bestselling young adult trilogy Darkest Powers, the Darkness Rising trilogy, and the Nadia Stafford series. She lives in rural Ontario, Canada with her husband and three children.
Excerpt. © Reprinted by permission. All rights reserved.:
***This excerpt is from an advance uncorrected copy proof***

When Nick Sorrentino’s alarm went off at 5 a.m., he bolted upright, certain it was his phone ringing, some emergency unfolding. Five years ago, he would have figured it’d be Elena or Clay with a Pack problem. These days, his first thought was “the boys.” Reese or Noah was in trouble and needed his help. Or they’d been out drinking and needed a lift. Even with were- wolves, the second was more likely, particularly if the werewolves in question were twenty-two and nineteen.

But it wasn’t a phone call—it was the alarm. Why the hell would he set it for 5 a.m.? It must have been one of the boys, playing a sadistic . . .
As he reached to shut the phone off, he realized it wasn’t on the nightstand. Well, yes, it was, but there was an obstacle in between him and it. A woman.

She groaned, fumbled for his phone, and handed it to him.

Right. That was why he’d set the alarm. He needed to get home in time to take Noah to school because Noah had been forbidden to use his car, which was, Nick had to admit, turning out to be more of a punishment for him.

At least he’d had the presence of mind to set the alarm. That alone was an accomplishment, given that he hadn’t decided he wasn’t heading home until he’d been in the back of a cab, with Jacinda undoing his zipper. Maybe it was a sign that he’d really had one too many women go down on him in the back of a taxi if he could still pause to think, Huh, I should set my alarm. That, or he was getting old.

“Are you going to turn that off?” It was a woman’s voice . . . but didn’t sound like Jacinda. Nick turned his head to see her friend, Heidi, curled up on his other side. Right. Huh. Well, maybe he wasn’t that old yet.

He shut off the alarm. Then he checked his e-mail, making sure he didn’t have an angry message from Frank Russell. Russell was the client he’d taken out last night on a double date with Jacinda and Heidi. Nick looked from one woman to the other. Not the way a double date was supposed to work.

He did have an e-mail from Russell, but it only thanked him for the evening out and asked for Heidi’s phone number. Russell had apparently left with Heidi, but he said that she’d had an emergency and taken off. Which must have been when she’d hopped into the cab with Nick and Jacinda, just before it pulled away from the curb. At least Russell hadn’t figured that out.

Nick climbed over Jacinda and started pulling on his trousers.

Heidi rolled from bed and stumbled into the bathroom.

“Where are you rushing off to?” Jacinda asked as she watched him dress. “You never start work before nine, which means we have plenty of time for another round. Or two.”
She tugged back the covers, showing him what was on offer. It was, he had to admit, a very nice offer. Tempting, though? Well, that was the problem. Ten years ago he would have already been back in that bed. Now, though, he felt only an answering twitch in his groin and a spark of regret.
“I’d love to,” he said. “But I need to take Noah to school, and it’s an hour drive home.”
“The kid has his license, Nick. He even has a car.” “He lost his privileges. He drove after having a beer.” “A beer? One?”
Nick pulled on his shirt. “That’s the rule.”

Since always, he could say. Maybe not the ones most of society lived by—grow up, get a job, marry, have kids—but he obeyed the laws of his kind, of his Pack. Imposing them on Noah was as important as sticking to them himself, no matter how inconvenient.

“If I set out a punishment, I need to follow through with it.”

Jacinda shook her head. “I’m not sure I like this new Nick. The old, irresponsible one was a whole lot more fun.”

“Could have sworn you had fun last night. Or maybe that was just Heidi.”

She gave him a smile for that. “Okay. But still, taking in those cousins? And going to work every day? That’s not the Nick I knew.”

“I haven’t been that Nick in years, Jace.”

“I know, but it’s getting worse. How long has it been since you called me? I’m beginning to think I might need to bring a friend more often, just to keep you interested.”

He bent to kiss her. “You know better than that. Adding Heidi to the mix was your idea. I’m just flexible and accommodating.”

She caught his hand and pulled him closer. Her other hand went to his waistband, but he peeled her fingers off.

“Don’t tempt me, Jace. I really do need to leave.”

He gave her a last quick kiss and started for the door. “Were you even planning to come back?” she asked. He glanced over his shoulder at her.

“Last night,” she said. “Before I jumped you in the cab, were you even planning to come back to my place?”

“If you wanted me to,” he said, which was the truth, even if it didn’t quite answer the question. “Get some more sleep. I’ll call you.”

He hesitated. He could lie and say yes. Most guys would. But that was never how he’d done things.

“I’ll call when I can,” he said, and slipped out the door.
As Nick drove home, he left a voice mail with his admin assistant to say he might be late. He worked for his father at the family business, which just happened to be a multinational corporation. Nick’s corner of it was small, by choice. There was no way in hell he could run a business like that—he had neither the aptitude nor the interest.

Nick’s niche was graphic design and client services. He had an eye for what worked and an unerring instinct for knowing what people wanted. It wasn’t a cutthroat ability to pander and manipulate, but a genuine desire to please.

When he disconnected, his phone pinged with a text message for an entirely different sort of business. Pack business.

Nine months ago, Elena had become Pack Alpha. At almost the same time, they had discovered that a long-dead member was actually very much alive. Between shifting Pack dynamics, regular Pack business, and raising six-year-old twins, Elena and Clay had little time to search for Malcolm. Nick had offered to do it.

Malcolm Danvers. Estranged father of Jeremy Danvers, the former Alpha. Nick remembered Malcolm well. And not fondly. No one remembered Malcolm fondly. They weren’t searching for him to welcome him back. They needed to find and kill him. Preferably before Jeremy found out he hadn’t already been dead for twenty years, as they had thought.

Werewolves are, by nature, violent sons of bitches, as Clay would say. Clay had been bitten at the age of five, rescued and brought up by Jeremy. The first time Nick met him, Clay knocked him flying. His way of saying hello . . . and establishing dominance.

Nick didn’t have much use for dominance. He was happier obeying orders than giving them. Except now that his best friends led the Pack, he’d realized it was time for him to step up and do more. Hence offering to handle the hunt for Malcolm.

A hunt like this wasn’t Nick’s area of expertise. While he was a fine fighter, he didn’t feel the usual drive to hunt, to protect territory, to fight for his place. Elena teased he satisfied that urge in his romantic pursuits, yet the truth was that he didn’t really pursue there, either. Like hunting, he enjoyed it and he’d rarely turn down an opportunity, but it wasn’t a driving force in his life.

Malcolm was different. He’d always pursued fights and women with equal vigor. And with the same ferocity. Women were prizes to be conquered and then discarded. Or worse. Nick’s grandfather, Dominic, had believed Malcolm killed Jeremy’s mother. Not that the old Alpha had turned him out of the Pack for it. Malcolm was too good a fighter to lose over a dead woman. Another Pack, another time.

Now, Malcolm was back and very much alive. And finding him was Nick’s job.