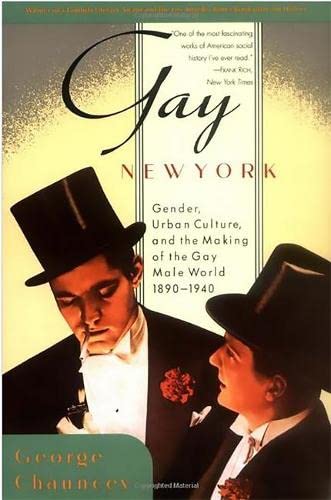 Gay New York brilliantly shatters the myth that before the 1960s gay life existed only in the closet, where gay men were isolated, invisible, and self-hating. Based on years of research and access to a rich trove of diaries, legal records, and other unpublished documents, this book is a fascinating portrait of a gay world that is not supposed to have existed.

George Chauncey is professor of American history at the University of Chicago and the author of Gay New York: Gender, Urban Culture, and the Making of the Gay Male World, 1890-1940, which won the distinguished Turner and Curti Awards from the Organization of American Historians, the Los Angeles Times Book Prize, and the Lambda Literary Award. He testified as an expert witness on the history of antigay discrimination at the 1993 trial of Colorado's Amendment Two, which resulted in the Supreme Court's Romer v. Evans decision that antigay rights referenda were unconstitutional, and he was the principal author of the Historians' Amicus Brief, which weighed heavily in the Supreme Court's landmark decision overturning sodomy laws in Lawrence v. Texas (2003). The recipient of a Guggenheim Fellowship, he lives and works in Chicago.

Historian Chauncey (Univ. of Chicago) brilliantly maps out the complex gay world of turn-of-the-century New York City. This book's publication is timed to coincide with the 25th anniversary of the uprising at the Stonewall Inn, which is often hailed as the birth of the modern gay and lesbian movement. Yet Chauncey convincingly puts Stonewall in perspective: It hardly marked the beginning of urban gay pride or nightlife. Rather than languishing in obscurity and isolation, as has long been assumed, many gay male New Yorkers thrived in close, often proud communities decades before the famous riots. He argues that before WW II the boundaries between homosexual and heterosexual behavior were far looser than they were later, particularly among working-class men. Gay New York reconstructs prewar gay life through police records, newspapers, oral histories, the papers of the Society for the Suppression of Vice, diaries, medical records, and other fascinating primary texts. The material is rich and much of it startlingly revealing about prewar social mores: A State Liquor Authority investigator in 1939 amiably refers to a drag queen by the feminine pronoun, boasting that ``she liked us very much,'' while a musician's diaries tell of his often successful attempts at picking up uniformed policemen. This was clearly a world of permeable sexual boundaries. Chauncey (co-editor, Hidden From History: Reclaiming the Gay and Lesbian Past, not reviewed) is a savvy tour guide, leading us through bars, speakeasies, parks, bathhouses, streets, rooming houses, and cafeterias, always providing ample historical context and intriguing interpretive possibilities. He explores not only the mainstream culture's influence on gay urban life, but vice versa, arguing that homosexuality and heterosexuality are historically specific categories that evolved in the beginning of this century and shaped each other. Chauncey has made a stunning contribution not only to gay history, but to the study of urban life, class, gender--and heterosexuality. -- Copyright ©1994, Kirkus Associates, LP. All rights reserved.