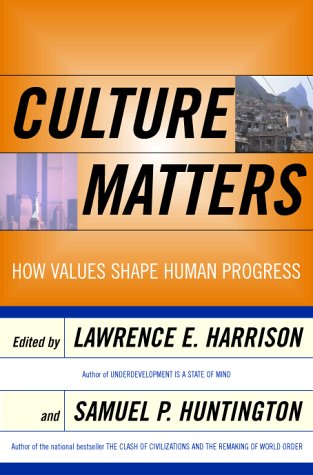 The world at the beginning of the twenty-first century is more divided than ever between the rich and the poor, between those living in freedom and those under oppression. Even in prosperous democracies, troubling gaps in well-being persist. As the credibility of traditional explanations--colonialism, dependency, racism--declines, many now believe that the principal reason why some countries and ethnic groups are better off than others lies in the cultural values that powerfully shape nations and people's political, economic, and social performance. Many of the distinguished contributors to Culture Matters believe that value and attitude change is indispensable to progress for those who are lagging.Among the prominent scholars and journalists contributing to the volume are Francis Fukuyama, Nathan Glazer, David Landes, Seymour Martin Lipset, Orlando Patterson, Michael Porter, Jeffrey Sachs, and Richard Shweder.

This collection of essays addresses a difficult question: Are some cultures better than others at creating freedom, prosperity, and justice? Although Culture Matters offers varying responses to this politically incorrect question, its editors, Lawrence E. Harrison and Samuel P. Huntington, as well as the bulk of its contributors, answer in some form of the affirmative. In an introduction, Harrison (author of Underdevelopment Is a State of Mind) writes in the third person of the movement he helps lead: "They are the intellectual heirs of Alexis de Tocqueville, who concluded that what made the American political system work was a culture congenial to democracy; Max Weber, who explained the rise of capitalism as essentially a cultural phenomenon rooted in religion; and Edward Banfield, who illuminated the cultural roots of poverty and authoritarianism in southern Italy, a case with universal applications." (The book, moreover, is dedicated to Banfield, "who has illuminated the path for so many of us.") For readers loath to make value judgments about cultures, Culture Matters may be tough going. But admirers of Trust by Francis Fukuyama, The Wealth and Poverty of Nations by David Landes, and any number of books by Thomas Sowell will find much to admire on these pages. Fukuyama and Landes, in fact, have written chapters--along with Barbara Crossette, Robert Edgerton, Nathan Glazer, Seymour Martin Lipset, Orlando Patterson, Lucian Pye, Jeffrey Sachs, and many others. In an especially compelling essay on Africa's continuing plight, Daniel Etounga-Manguelle asks, "What cultural reorientation is necessary so that in the concert of nations we [Africans] are no longer playing out of tune?"

And this is the point of the book: not to denigrate any particular culture, but to figure out how all people can improve their quality of life. In the words of Harrison, who pens the book's concluding essay, "It offers an important insight into why some countries and ethnic/religious groups have done better than others, not just in economic terms but also with respect to consolidation of democratic institutions and social justice. And those lessons of experience, which are increasingly finding practical application, particularly in Latin America, may help to illuminate the path to progress for that substantial majority of the world's people for whom prosperity, democracy, and social justice have remained out of reach." --John J. Miller

Samuel P. Huntington is the Albert J. Weatherhead III Professor at Harvard University and the author of The Clash of Civilizations and The Remaking of World Order.

Lawrence E. Harrison is a senior fellow at the Harvard Academy for International and Area Studies and the author of Who Prospers? and The Pan-American Dream.