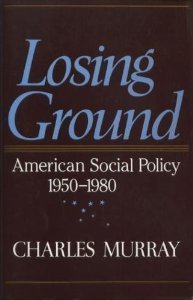 This classic book serves as a starting point for any serious discussion of welfare reform. Losing Ground argues that the ambitious social programs of the1960s and 1970s actually made matters worse for its supposed beneficiaries, the poor and minorities. Charles Murray startled readers by recommending that we abolish welfare reform, but his position launched a debate culminating in President Clinton's proposal "to end welfare as we know it."

Charles Murray is W. H. Brady Scholar at the American Enterprise Institute. A prominent political scientist and author, he first came to national attention in 1984 with the publication of Losing Ground, which served as the intellectual foundation for the Welfare Reform Act of 1996. He is the author of several other books, including the New York Times bestseller The Bell Curve, Coming Apart, What It Means to Be a Libertarian, Real Education, and the forthcoming By the People. He earned a Ph.D. in political science from MIT and lives near Washington, D.C.

Myron Magnet
There's no better proof of the adage that ideas have consequences than Charles Murray's Losing Ground: in its argument, and in the fact that it changed the world.”

Newt Gingrich
One of the pivotal books around which American history turned.”

David Frum
One of the outstanding works of the pioneering era of conservative thought.”