Items related to The Nazi Doctors: Medical Killing and the Psychology...

Lifton, Robert Jay The Nazi Doctors: Medical Killing and the Psychology of Genocide

The Nazi Doctors: Medical Killing and the Psychology of Genocide 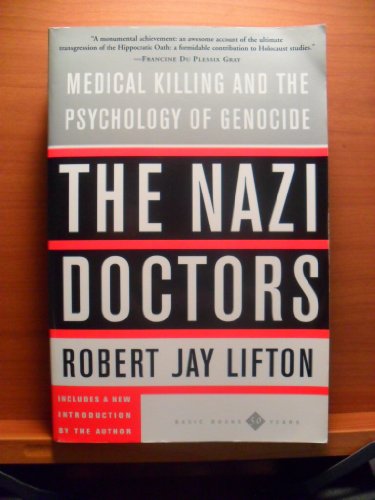 Winner of the Los Angeles Times Book Prize
With a new preface by the author
In his most powerful and important book, renowned psychiatrist Robert Jay Lifton presents a brilliant analysis of the crucial role that German doctors played in the Nazi genocide. Now updated with a new preface, The Nazi Doctors remains the definitive work on the Nazi medical atrocities, a chilling exposé of the banality of evil at its epitome, and a sobering reminder of the darkest side of human nature.

Robert Jay Lifton is a lecturer in Psychiatry at Columbia University and distinguished professor emeritus of psychiatry and psychology at the City University of New York. He has previously taught at Yale and Harvard medical schools. A leading American Psychiatrist, Lifton is the author of many widely acclaimed works, including Death in Life: Survivors of Hiroshima, winner of the National Book Award.

Nazi doctors did more than conduct bizarre experiments on concentration-camp inmates; they supervised the entire process of medical mass murder, from selecting those who were to be exterminated to disposing of corpses. Lifton (The Broken Connection; The Life of the Self shows that this medically supervised killing was done in the name of "healing," as part of a racist program to cleanse the Aryan body politic. After the German eugenics campaign of the 1920s for forced sterilization of the "unfit,"it was but one step to "euthanasia," which in the Nazi context meant systematic murder of Jews. Building on interviews with former Nazi physicians and their prisoners, Lifton presents a disturbing portrait of careerists who killed to overcome feelings of powerlessness. He includes a chapter on Josef Mengele and one on Eduard Wirths, the "kind," "decent" doctor (as some inmates described him) who set up the Auschwitz death machinery. Lifton also psychoanalyzes the German people, scarred by the devastation of World War I and mystically seeking regeneration. This profound study ranks with the most insightful books on the Holocaust.
Copyright 1986 Reed Business Information, Inc.

1. The Nazi Doctors: Medical Killing and the Psychology of Genocide

2. The Nazi Doctors: Medical Killing and the Psychology of Genocide Lifton Robert Jay

4. The Nazi Doctors: Medical Killing And The Psychology Of Genocide Lifton, Robert Jay