Severin, Tim In Search Of Moby Dick The Quest For The White Whale

In Search Of Moby Dick The Quest For The White Whale 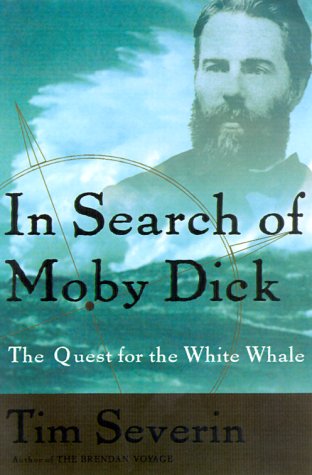 Among travel and adventure writers, Tim Severin occupies a unique place in that, as Jan Morris says, he "uniquely combines in himself the gifts of the adventurer, the historian, and the litterateur." Over the years, Severin has sailed in a leather boat across the Atlantic, traveled on horseback with the nomads of Mongolia, and sailed the Pacific on a bamboo raft in an effort to re-create the storied voyages and travels of Brendan, Jason, Ulysses, and Genghis Khan. He then spun these rich adventures into literary gold, writing such classics as The Brendan Voyage. Now Severin applies his boundless skills to a quintessentially American subject—Moby Dick—in an attempt to retrace the origins of Herman Melville's legendary literary creation.In In Search of Moby Dick Severin sets about determining the likelihood of the existence of one of our most iconic modern myths—the Great White Whale. To do so he travels to Nuku Hiva in the Marquesas Archipelago where the twenty-one-year-old Melville deserted his whaling ship in 1842 and began to cobble together the legends, tall tales, sea lore, and firsthand accounts garnered from the whalers he encountered, filtering all this material through his own fertile imagination to create his monumental novel. It is here that Severin begins to perceive the lush weave of fact and fiction, actual experience and extravagant yarn, that is Moby Dick, and the complex richness of Melville's tapestry becomes even clearer as Severin sails on throughout the South Pacific.

Historian and adventurer Tim Severin has made a career of retracing epic voyages. He crossed the Atlantic in an open boat of stretched leather to test whether a sixth-century Irish monk could have made a fabled journey to North America, and later explored the Spice Islands of eastern Indonesia to see how the archipelago has "evolved" since 19th-century naturalist Alfred Wallace first surveyed it. The quest for the white whale, however, lands Severin in different territory: the shifting currents of fiction. Following tenuous evidence of pale sperm whales, Severin embarks for the South Pacific and the birthing grounds of Melville's masterpiece. On Nuku Hiva, the setting for Typee, he finds that the island harbors "many of the sources that Melville had raided to embellish his own, rather thin, experiences." Also thin is any evidence of a white whale, so he moves on to Pamilican, a dirt-poor little scrape where the locals subsist on jerry cans of imported fresh water and by "jumping" the sea's bounty. Their principal prey is the whale shark, the largest fish in the sea. Artists of the jump actually wrestle these plankton eaters underwater by hand, hooking the beasts with a massive grappling hook before coming up for the fight on board. One ancient hunter speaks vaguely of having jumped a white whale shark, but there are also rumors of giant white manta rays and other fantastic creatures.

The centerpiece of the book is a visit to the little-known island of Lamarala, the "last community on earth where men still regularly hunt sperm whales by hand." An old-timer with 60 years of whaling notched into his harpoon explains enthusiastically that the white whale "has visited us many times. Sometimes it can be a wicked fellow." Severin's gripping firsthand account of an actual hunt gives credence to a 1993 report of 34 Lamaralese fishermen being towed out to sea for four days by a big bull sperm whale. But does he find Moby-Dick's kin? In a manner of speaking. What surfaces in these pages is not so much the white whale as the idea of the white whale--a creature bathed in mystery and the people that speak knowingly of it, all of whom give meaning to the sea. --Langdon Cook

Acclaimed adventure writer and explorer Tim Severin has made a career of retracing the storied journeys of mythical and historical figures in replica vessels. These experiences have been turned into a body of captivating and illuminating books, including The Brendan Voyage and In Search of Genghis Khan. When not traveling, he lives in County Cork, Ireland.

1. In Search of Moby Dick: The Quest for the White Whale

2. In Search Of Moby Dick The Quest For The White Whale Severin, Tim