Items related to Applied Economics: Thinking Beyond Stage One

Applied Economics: Thinking Beyond Stage One 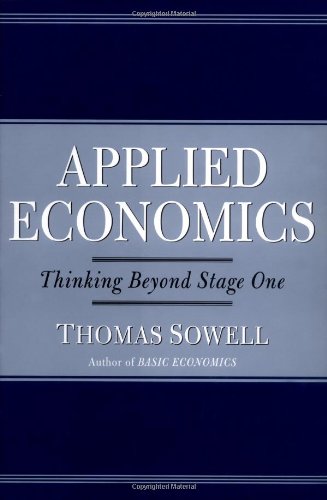 The application of economics to major contemporary real world problems--housing, medical care, discrimination, the economic development of nations--is the theme of this new book that tackles these and other issues head on in plain language, as distinguished from the usual jargon of economists. It examines economic policies not simply in terms of their immediate effects but also in terms of their later repercussions, which are often very different and longer lasting. The interplay of politics with economics is another theme of Applied Economics, whose examples are drawn from experiences around the world, showing how similar incentives and constraints tend to produce similar outcomes among very disparate peoples and cultures.

While politicians squabble over the pros and cons of price controls on prescription drugs, onlooking citizens are often left scratching their heads. Many of today's economic issues are obscured by their inherent complexity and the blarney coming from political talking heads. In his follow-up to Basic Economics, Sowell, a leading conservative spokesman and a senior fellow at the Hoover Institution, seeks to alleviate this confusion. He highlights the major differences between politicians (who act for the short term, i.e., reelection) and economists (who look at the long-range ramifications of policy), and urges voters to keep these differences in mind. Sowell then focuses on a few issues, including some political hot potatoes: medical care, housing, discrimination, insurance and the development of nations. He urges readers to consider not only the intended, immediate goal of a particular policy, but also its unintended, long-range impact. For instance, he says, supporters of nationalized health care overlook the fact that it often results in health-care shortages, reduced quality of services and black markets. The great achievement of Sowell's book is its simplicity. His writing is easy and lucid, an admirable trait considering the topic at hand. This book will not satisfy hard-core economic junkies, and Sowell does not pretend it will. His target audience is the average citizen who has little or no economics background, but would like the tools to think critically about economic issues. Some readers will be turned off by Sowell's preference for free-market principles, but the author is an esteemed economist and his explanations fit well within the mainstream. As a basic primer for the economically perplexed, this volume serves very well.
Copyright 2003 Reed Business Information, Inc.

1. Applied Economics: Thinking Beyond Stage One

2. Applied Economics: Thinking Beyond Stage One

3. Applied Economics: Thinking Beyond Stage One

4. Applied Economics: Thinking Beyond Stage One

5. Applied economics. thinking beyond stage one

6. Applied Economics: Thinking Beyond Stage One