Items related to Wealth, Poverty and Politics: An International Perspective 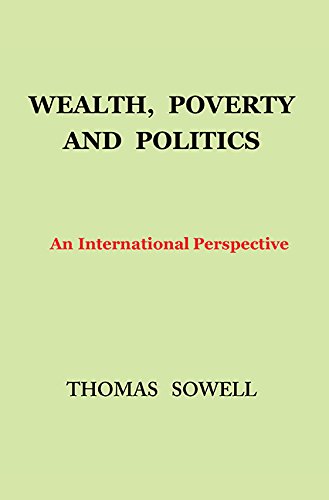 In Wealth, Poverty, and Politics, Thomas Sowell, one of the foremost conservative public intellectuals in this country, argues that political and ideological struggles have led to dangerous confusion about income inequality in America. Pundits and politically motivated economists trumpet ambiguous statistics and sensational theories while ignoring the true determinant of income inequality: the production of wealth. We cannot properly understand inequality if we focus exclusively on the distribution of wealth and ignore wealth production factors such as geography, demography, and culture.

Sowell contends that liberals have a particular interest in misreading the data and chastises them for using income inequality as an argument for the welfare state. Refuting Thomas Piketty, Paul Krugman, and others on the left, Sowell draws on accurate empirical data to show that the inequality is not nearly as extreme or sensational as we have been led to believe.

Transcending partisanship through a careful examination of data, Wealth, Poverty, and Politics reveals the truth about the most explosive political issue of our time.

Thomas Sowell is the Rose and Milton Friedman Senior Fellow at the Hoover Institution and has taught economics at Cornell, UCLA, and Amherst. The author of Intellectuals and Society and the classic Basic Economics, among others, Sowell lives in Stanford, California.

Breitbart
[Wealth, Poverty and Politics should be one of the most influential works of the 2016 election season. This isn't just a work of characteristic brilliance from Sowell it's a laser-guided intellectual weapon aimed at the foundations of liberal envy politics Dr. Sowell's book is a masterful fusion of science and common sense on the subject of why some groups are impoverished, and what society can do to lift them out of poverty Every presidential candidate should read this book immediately, and require all campaign surrogates to digest it as well Wealth, Poverty, and Politics provides the sharp intellectual weapons necessary to cut through that argument, and its wisdom can help conservatives design policies that might actually make a difference.”

This book will enhance and promote ongoing and important debates and discussions.”
Booklist

A provocative analysis of the universal causes of economic success and failure . While Sowell offers no pat solutions, his implied argument that cultural considerations must inform any serious attempt at improving the economic prospects of an underperforming nation or group merits serious consideration.
Kirkus Reviews
Wall Street Journal
In his latest tome, [Sowell] draws from this well of research to do what he has done so well for so long: question basic assumptions behind public policy and follow the facts where they lead him.”

Wall Street Journal, "Best Books of 2015"
Offers a refreshing and stimulating view Using a good dose of basic economics and stories of real people, [Sowell] shows that the spread of prosperity, even if unequal, is far more effective in eliminating deprivation than a preoccupation with reducing income gaps, which often turns into a counterproductive blame game, breeding resentment, hatred and ethnic conflict. It's carefully researched and more readable than other inequality books, which are often left unread after purchase.

Forbes
It's a scandal that economist Thomas Sowell has not been awarded the Nobel Prize. No one alive has turned out so many insightful, richly researched books. His latest is another triumph of crackling observations that underscore the ignorance of our economists and policymakers. His take on how culture, geography, politics and social factors affect how societies progress or don't will rile those addicted to political correctness but leave everyone else wiser.”

National Review
Sowell has done us a great service by placing our current controversies in international context.”

American Spectator
Sowell's latest book, latest of 52 by my count, contains the kind of acute analysis and fearless commentary his readers have relied on since 1971's Economics: Analysis and Issues his writing is crystal-clear, free of academic jargon and the kind of specialist clutter that often disfigures the writing of academics Most of his books remain in print and repay the time of thoughtful readers, as does Wealth, Poverty, and Politics. Santa should be aware of this.”

Conservative Book Club
Transcending partisanship through a careful examination of data, Wealth, Poverty, and Politics reveals the truth about the most explosive political issue of our time.”

Townhall
A true gem in terms of exposing the demagoguery and sheer ignorance of politicians and intellectuals in their claims about wealth and poverty Dr. Sowell's new book tosses a monkey wrench into most of the things said about income by politicians, intellectuals and assorted hustlers, plus it's a fun read.”