Items related to Geometry For Dummies 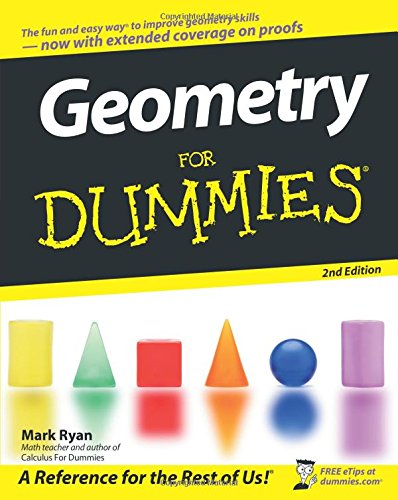 Learning geometry doesn’t have to hurt. With a little bit of friendly guidance, it can even be fun! Geometry For Dummies, 2nd Edition, helps you make friends with lines, angles, theorems and postulates. It eases you into all the principles and formulas you need to analyze two- and three-dimensional shapes, and it gives you the skills and strategies you need to write geometry proofs.

Before you know it, you’ll be devouring proofs with relish. You’ll find out how a proof’s chain of logic works and discover some basic secrets for getting past rough spots. Soon, you’ll be proving triangles congruent, calculating circumferences, using formulas, and serving up pi. The non-proof parts of the book contain helpful formulas and tips that you can use anytime you need to shape up your knowledge of shapes. You’ll even get a feel for why geometry continues to draw people to careers in art, engineering, carpentry, robotics, physics, and computer animation, among others.You’ll discover how to:

So quit scratching your head. Geometry For Dummies, 2nd Edition, gets you un-stumped in a hurry.

Get un-stumped in a hurry! Proofs made easier

Make friends with lines and angles, theorems and postulates — and prove it

The proof is in the pudding — and the parallelogram, and sometimes the rhombus. With this friendly guide, you'll soon be devouring proofs with relish. You'll find out how a proof's chain of logic works and discover some basic secrets for getting past rough spots. Before you know it, you'll be proving triangles congruent, calculating circumference, using formulas, and serving up pi.

A graduate of Brown University and the University of Wisconsin Law School, Mark Ryan has been teaching math since 1989. He runs The Math Center (www.themathcenter.com) in Winnetka, Illinois, where he teaches high school math courses, including an introduction to geometry and a workshop for parents based on a program he developed, The 10 Habits of Highly Successful Math Students. In high school, he twice scored a perfect 800 on the math portion of the SAT, and he not only knows mathematics, he has a gift for explaining it in plain English. He practiced law for four years before deciding he should do something he enjoys and use his natural talent for mathematics. Ryan is a member of the Authors Guild and the National Council of Teachers of Mathematics.
Geometry For Dummies, 2nd Edition, is Ryan’s fifth book. Everyday Math for Everyday Life (Grand Central Publishing) was published in 2002; Calculus For Dummies (Wiley), in 2003; Calculus Workbook For Dummies (Wiley), in 2005; and Geometry Workbook For Dummies (Wiley), in 2006. His math books have sold over 200,000 copies.