Items related to An Actor and a Gentleman

Gossett Jr., Louis; Karas, Phyllis An Actor and a Gentleman

An Actor and a Gentleman 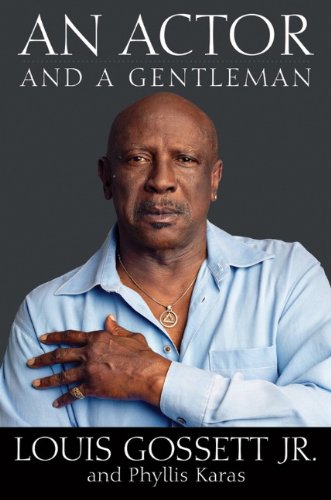 Louis Gossett Jr. is one of the most respected African American stage and screen actors, who rose to fame with his Emmy-winning role in the television miniseries Roots and Oscar-winning performance in An Officer and a Gentleman. Now he tells the story of his fifty-plus years in the entertainment world—from his early success on the New York stage appearing with Ruby Dee and Sidney Poitier in A Raisin in the Sun, through his long Hollywood career working alongside countless stars, including Marilyn Monroe and Dennis Quaid. He writes frankly of his struggle to get leading roles and fair pay as a black man in Hollywood, his problems with drugs and alcohol that took years to overcome, and his current work to eradicate racism and violence and give our children a better future.

An Actor and a Gentleman penetrates the celebrity glitz and glamour to offer an honest, heartfelt portrayal of the African American experience both in Hollywood and the New York theater world, as told by one of the nation's most enduring and highly esteemed actors.

He was a Broadway star at age seventeen. His first job out of college was the 530-performance run of Lorraine Hansberry's groundbreaking play A Raisin in the Sun, in which he appeared with Sidney Poitier, Ruby Dee, and Ossie Davis. At age thirty-two, he became the first African American actor to play an authority figure in a major primetime network broadcast, which was also the first-ever made-for-TV movie, Companions in Nightmare. As impressive as these accomplishments are, they all occurred long before Louis Gossett Jr. won an Emmy Award and an Oscar and became one of the best-loved and most famous and respected actors in America.

In this frank and revealing autobiography, Mr. Gossett looks back over his fifty-five-year career in theater, film, and television (with a little basketball, singing, and guitar playing on the side). He reminisces about a mostly happy childhood in Coney Island; tells wonderful stories about working and playing with the biggest names in show business; and reveals how, in spite of what might seem to many a charmed life, his road was often made rocky by the scourge of racism from without and personal demons within.

Among the most treasured memories of his early Broadway days are the twice-weekly poker games with Poitier and Paul Newman, between shows on matinee days, and playing softball in the Broadway Show League, where he discovered very quickly that he wasn't the only gifted athlete in show business. He tells the story of his brief but unforgettable romance with the highly talented but tragically short-lived actress Diana Sands, and he reveals how Shirley Booth kept him from being fired from the cast of a pre-Broadway touring show and got him invited to a lot of parties at the same time.

Mr. Gossett's bitterest memories include a day that still ranks among the worst in his life. Having arrived in Hollywood and being put up, for the first time, in the lavish Beverly Hills Hotel, he started out on what should have been a leisurely drive from the rental car office back to the hotel. Almost immediately, he was pulled over by an L.A. County sheriff for DWB (Driving While Black). He was stopped six more times before he reached the hotel. In the end, that short trip took four hours. But the horror and humiliation of that experience were just a foretaste of what L.A. police officers would put him through later that same night. These events, and many more like them, were part of what inspired him to launch the Eracism Foundation in 2006 and devote the rest of his life to an all-out offensive against racism, violence, and ignorance.

Louis Gossett Jr. is not your run-of-the-mill movie star, and An Actor and a Gentleman isn't just another Hollywood memoir. It is a funny, fascinating, and sometimes heartbreaking tour through the last half-century of American life, as seen through the eyes of one of our most talented artists.

An unvarnished account of a stellar career in interesting times

From his days as a teenage Broadway star through his prominent role in Barack Obama's presidential campaign, Louis Gossett Jr. has always had an unusual perch from which to view American life. In An Actor and a Gentleman, he uses that unique perspective to create a smart, funny, and bittersweet memoir of his career and of the many changes, positive or not, that have reshaped America during his extraordinary life.

"Lou Gossett Jr., one of America's most repected actors, has placed both his highly praised career and the story of his life between the covers of a book. He stands tall in both instances."
—Sidney Poitier

"Bold, original, defiant, and uplifting, Academy Award–winning actor Louis Gossett Jr. has written a compelling memoir alternating between struggle and progress. Whether you read it and weep, or read it and cheer, it is a great read and a must-read! Every woman, man, and child will be overwhelmed by Gossett's ability to overcome adversity and to become a true leader in the twenty-first century. Read this book. It will change your life."
—Charles J. Ogletree Jr., professor, Harvard Law School, and author of All Deliberate Speed, When Law Fails, and The Presumption of Guilt: The Arrest of Henry Louis Gates

"What an amazing story . . . what an amazing book! You certainly have been 'there' and back. Thanks, Lou, for sharing your story with me. It's a treasure!"
—James Garner

"You've always exceeded every expectation as an Actor, and as a Gentleman you have inspired young and old. Through all the generations we have lived together, you have brought me much joy and laughter and enriched my life. I love you, man!"
—Hilly Elkins, long-time theater and film producer

1. An Actor and a Gentleman

2. An Actor and a Gentleman

3. An Actor and a Gentleman

4. An Actor and a Gentleman

5. An Actor and a Gentleman Gossett Jr., Louis and Karas, Phyllis

6. An Actor and a Gentleman