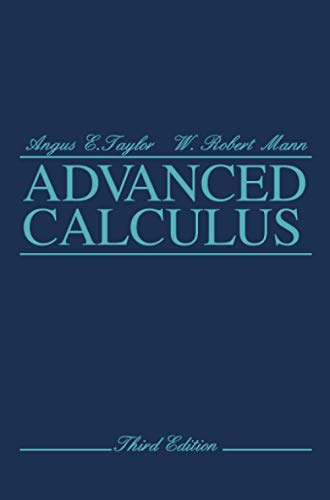 Outlines theory and techniques of calculus, emphasizing strong understanding of concepts, and the basic principles of analysis. Reviews elementary and intermediate calculus and features discussions of elementary-point set theory, and properties of continuous functions.

Angus Ellis Taylor (October 13, 1911 – April 6, 1999) was a mathematician and professor at various universities in the University of California system. He earned his undergraduate degree at Harvard summa cum laude in 1933 and his PhD at Caltech in 1936 under Aristotle Michal with a dissertation on analytic functions. By 1944 he had risen to full professor at UCLA, whose mathematics department he later chaired (1958–1964). Taylor was also an astute administrator and eventually rose through the UC system to become provost and then chancellor of UC Santa Cruz. He authored a number of mathematical texts, one of which, Advanced Calculus (1955, Ginn and Co.), became a standard for a generation of mathematics students.

Shipping: US$ 34.91
From United Kingdom to U.S.A.
Destination, rates & speeds