Items related to Reminiscences of a Stock Operator 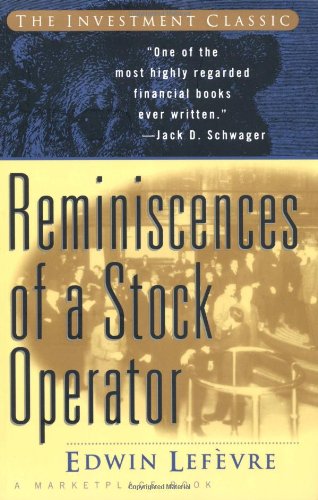 "In my interviews with over 30 of the best traders of our time, there were some questions that I raised in each conversation. One of these was: Are there any books that you found particularly valuable and would recommend to aspiring traders? By far, the most frequent response was Reminiscences of a Stock Operator-a book that was over 70 years old!"
—from the Foreword by Jack Schwager, author of Market Wizards and The New Market Wizards

"Although Reminiscences.was first published some 70 years ago, its take on crowd psychology and market timing is as timely as last summer's frenzy on the foreign exchange markets."
—Worth magazine

"The most entertaining book written on investing is Reminiscences of a Stock Operator, by Edwin Lefevre, first published in 1923."
—The Seattle Times

"The best book I've read is Reminiscences of a Stock Operator. I keep a supply for people who come to work for me."
—Martin Zweig

"After 20 years and many re-reads, Reminiscences is still one of my all-time favorites."
—Kenneth L. Fisher

Forbes First published in 1923, Reminiscences of a Stock Operator is the fictionalized biography of Jesse Livermore, one of the greatest speculators ever. Reminiscences remains the most widely read, highly recommended investment book ever written. Generations of investors have found that it has more to teach them about themselves and other investors than years of experience in the market. This is a timeless tale that will enrich the lives-and portfolios-of today's investors as it has those of generations past.

Stock investing is a relatively recent phenomenon and the inventory of true classics is somewhat slim. When asked, people in the know will always list books by Benjamin Graham, Burton G. Malkiel's A Random Walk Down Wall Street, and Common Stocks and Uncommon Profits and Other Writings by Philip A. Fisher. You'll know you're getting really good advice if they also mention Reminiscences of a Stock Operator by Edwin Lefčvre.

Reminiscences of a Stock Operator is the thinly disguised biography of Jesse Livermore, a remarkable character who first started speculating in New England bucket shops at the turn of the century. Livermore, who was banned from these shady operations because of his winning ways, soon moved to Wall Street where he made and lost his fortune several times over. What makes this book so valuable are the observations that Lefčvre records about investing, speculating, and the nature of the market itself. For example:

"It never was my thinking that made the big money for me. It always was my sitting. Got that? My sitting tight! It is no trick at all to be right on the market. You always find lots of early bulls in bull markets and early bears in bear markets. I've known many men who were right at exactly the right time, and began buying or selling stocks when prices were at the very level which should show the greatest profit. And their experience invariably matched mine--that is, they made no real money out of it. Men who can both be right and sit tight are uncommon."

If you've ever spent weekends and nights puzzling over whether to buy, sell, or hold a position in whatever investment--be it stock, bonds, or pork bellies, you'll be glad that you read this book. Reminiscences of a Stock Operator is full of lessons that are as relevant today as they were in 1923 when the book was first published. Highly recommended. --Harry C. Edwards

"... I learned early that there is nothing new in Wall Street. There can’t be because speculation is as old as the hills. Whatever happens in the stock market today has happened before and will happen again. I’ve never forgotten that.... The fact that I remember that way is my way of capitalizing experience."
—from Reminiscences of a Stock Operator

First published in 1923, Reminiscences of a Stock Operator is the fictionalized biography of Jesse Livermore, one of the greatest speculators who ever lived. Now, more than 70 years later, Reminiscences remains the most widely read, highly recommended investment book ever written. Generations of investors have found that it has more to teach them about themselves and other investors than years of experience in the market. They have also discovered that its trading advice and keen analyses of market price movements ring as true today as in 1923. Jesse Livermore won and lost tens of millions of dollars playing the stock and commodities markets during the early 1900s—at one point making the thenastronomical amount of ten million dollars in just one month of trading. So potent a market force was he in his day that, in 1929, he was widely believed to be the man responsible for causing the Crash. He was forced into seclusion and had to hire a bodyguard. Originally reviewed in The New York Times as a nonfiction book, Reminiscences of a Stock Operator vividly recounts Livermore’s mastery of the markets from the age cf 14. Always good at figures, he learns, early on, that he can predict which way the numbers will go. Starting out with an investment of five dollars, he amasses a fortune by his early twenties and establishes himself as a major player on the Street. He makes his first killing in 1906, selling short on Union Pacific. He goes on to corner the cotton market, and has a million-dollar day Bullish in bear markets and bearish among bulls, he claims that only suckers gamble on the market. The trick, he advises, is to protect yourself by balancing your investments, and selling big on the way down. Livermore goes broke three times, but he comes back each time feeling richer for the learning experience. Offering profound insights into the motivations, attitudes, and feelings shared by every investor, Reminiscences of a Stock Operator is a timeless instructional tale that will enrich the lives—and portfolios—of today’s traders as it has those of generations past.

REMINISCENCES OF A STOCK OPERATO