Items related to Freud: Darkness in the Midst of Vision--An Analytical...

Freud: Darkness in the Midst of Vision--An Analytical Biography 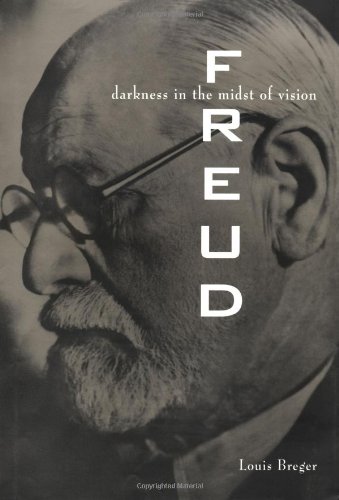 Advance Praise for Louis Breger's FREUD
"Louis Breger's rich and readable study of Freud offers a thoughtfully complex account of a great but flawed man. Everyone with an interest in psychoanalysis and the psychoanalytic movement will enjoy exploring, grappling with, arguing about, and learning from this absolutely fascinating book."-JUDITH VIORST, AUTHOR,
Necessary Losses and Imperfect Control "Written with brilliance and insight, Freud: Darkness in the Midst of Vision takes us on a daring, at times chilling, journey to the early years of psychoanalysis, revealing both the human weaknesses and the professional triumphs of its founder. . . . Cutting away the accretions of fabrication and romance cloaking Sigmund Freud, Breger has reinstated historical honesty to its rightful, high place, but the figure who emerges at the end of this breathlessly honest biography is quite as extraordinary as the legend concocted by Freud and perpetuated by his followers. Fresh, vigorous, and lucid."-PHILIP M. BROMBERG, Ph.D., CLINICAL PROFESSOR OF PSYCHOLOGY, NEW YORK UNIVERSITY
"Louis Breger's fine new biography of Freud is a welcome contribution to the existing literature and a corrective to much of it. It is also one of the best intellectual histories of the origin and development of psychoanalysis I have read in recent years. Breger is to be commended for his original research, the objectivity of his views, and the elegance and grace of his writing."-DEIRDRE BAIR, NATIONAL BOOK AWARD WINNER FOR Samuel Beckett AND AUTHOR OF A FORTHCOMING BIOGRAPHY OF CARL JUNG
"Finally, the Freud biography we have long been waiting for. With the history of Europe in the background, we follow with fascination Freud's journey from an impoverished childhood filled with losses to worldly fame, ending in exile in England. We come to understand the impact of Freud's difficult personality on the development of his brilliant as well as questionable theoretical ideas. Breger writes with compassion and fairness toward Freud as well as toward the many interesting personalities who cross his life, with their complicated relationships to the great man."-SOPHIE FREUD, FREUD'S GRANDDAUGHTER AND PROFESSOR EMERITUS OF SOCIAL WORK, SIMMONS COLLEGE
"Louis Breger's magnificent book is the definitive work on the personal psychology of Sigmund Freud. it brilliantly illuminates how the darkness in Freud's vision has affected psychoanalytic history. This book will be central for psychoanalytic scholarship for decades to come."-GEORGE E. ATWOOD, Ph.D., PROFESSOR OF PSYCHOLOGY, RUTGERS UNIVERSITY

Sigmund Freud, father of psychoanalysis, plunged into the dark regions of the human psyche-including his own-to reveal the truth about sexuality, neurosis, and the unconscious. Or so the legend has it. In this perceptive biography, Louis Breger presents a striking new portrait of one of the great figures of the twentieth century, showing how Freud systematically obscured the truth about his life to create a heroic image of himself that was a blend of fact and fantasy.

In his youth, Freud's family lived on the edge of poverty in anti-Semitic Vienna. His mother was a demanding and controlling woman and his father a weak and failed man. Young Sigmund escaped from all these unbearable conditions into the world of books and his imagination, where he sought solace and consolation in fantasies of the ancient world. He was drawn to powerful conquerors-Oedipus, Alexander the Great, Hannibal, Napoléon-and longed for the day when he could achieve fame and power, when he could become, in his own words, a "hero." The boy who had lived in a fantasy world became an impressive prose stylist, capable of presenting his often controversial ideas in compelling ways. He used his formidable skills to shape both his personal legend and the history of the psychoanalytic movement. Out of his self-analysis and work with patients came his seminal contributions: the unconscious, the significance of dreams, the formative influence of early emotional experience, and psychoanalysis as a form of therapy.

But he could see only so much about himself, and his blindness to the pain, fear, and helplessness of his early years led him to create a myth about his childhood-centered on the Oedipus complex-that obscured the sources of his adult anxiety, symptoms, and addictions. From this came the overblown theories, the neglect of trauma and real-life experience, the distorted views of women, and the authoritarian form of treatment, all of which have plagued psychoanalysis since its inception. Breger's insightful portrait reveals Freud as a man of striking contradictions, someone whose startling originality coexisted with a rigid adherence to dogma, a person who spent his life immersed in the most intimate details of other people's lives yet remained wrapped up in himself and curiously remote from others, a man of deep insights who was also blind to the effect he had on other people. In demythologizing Freud, Breger penetrates to the "darkness" behind one of the brightest minds of the twentieth century.

LOUIS BREGER is Professor of Psychoanalytic Studies, Emeritus, at the California Institute of Technology and founding President of the Institute of Contemporary Psychoanalysis. He has been a practicing psychotherapist/psychoanalyst for over thirty-five years and has published numerous scholarly articles and books dealing with dreams, personality development, literary interpretation, and psychoanalytic theory.

1. Freud: Darkness in the Midst of Vision--An Analytical Biography

2. Freud: Darkness in the Midst of Vision--An Analytical Biography

3. Freud: Darkness in the Midst of Vision--An Analytical Biography

4. FREUD: DARKNESS IN THE MIDST OF