Items related to The Case for Israel

Dershowitz, Alan The Case for Israel 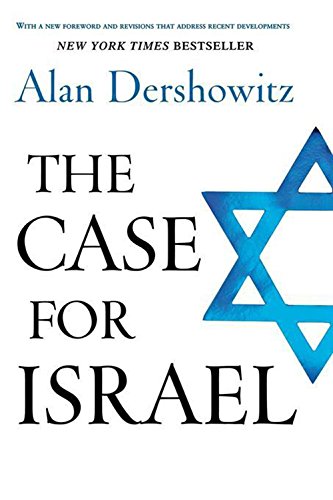 The Case for Israel is an ardent defense of Israel's rights, supported by indisputable evidence.

"Eric Hoffer wrote in the '60s about the phenomenon of the assimilated Jew who would, to prove his worth to his betters, oppose the state of Israel and call it conscience. I applaud Professor Dershowitz for his consistent, principled, and reasoned defense of Israel, and, so, of the Jewish people." —David Mamet

"In a world in which Israel seems always to be the accused, regardless of the facts, Alan Dershowitz's defense offers an oasis of sanity and straight talk. It may be too much to hope that Israel's accusers will read this powerful and persuasive response to their charges. It is not at all too much to ask that fair-minded observers do so." —Floyd Abrams

"Alan Dershowitz's detailed and penetrating analysis of the issues that fuel the continuing war in Israel should be read by everyone interested in reaching a fair conclusion as to how that tragic conflict should be ended. Every charge leveled by Israel's opponents is dealt with lucidly and convincingly by one of the nation's brightest minds and most effective advocates." —Mario M. Cuomo

"This is a powerful and brilliantly argued book by a life- long champion of law, freedom, and human rights. Dershowitz faces down the Big Lies one by one and proves that Israel is not guilty of colonialism, apartheid, or "Nazism." Anyone who cares about Israel—and about the truth—will find this essential, even life-saving reading." —Phyllis Chesler Ph.D, author of The New Anti-Semitism: The Current Crisis and What We Can Do About It

"In this important book, as in many of his writings, Alan Dershowitz remains an ardent and courageous defender of Israel and what the law stands for." —Elie Wiesel

"The Case for Israel is a marvelous primer for supporters of that beleaguered state who want to d efend Israel from the calamities falsely ascribed to it by its worldwide enemies. Dershowitz has summarized those false accusations and provided the facts, enabling the reader to respond to the anti-Semites and those who are hostile to Israel. More than a great read, it is essential if you want to be equipped to defend Israel in the world of conversation and debate." —Edward I. Koch

"The Case for Israel is indispensable reading for those of us who are deeply disturbed by the rise of anti-Semitism in American society, even on college campuses." --Henry Louis Gates, Jr., Chairman, Department of African and African-American Studies at Harvard

Even as Israel boldly offers statehood to Palestinians in exchange for an enduring peace, many academics and activists–primarily but not exclusively from the hard left–have gone on the attack against Israel, deriding it as an imperialist power bent on oppressing the Palestinians. On prominent campuses across the United States and throughout the world, petitions circulate asking universities to divest holdings in Israel and to boycott Israeli Jews without regard to their individual views. Virulent opponents of Israel have accused that democracy of unspeakable human rights abuses, while many who believe otherwise remain silent. Now, in this impassioned and closely argued book, Harvard law professor Alan Dershowitz sets the record straight and explains why Israel, while not perfect, is in fact the sole outpost of liberty and democracy in the Middle East–a country that has earned the right to exist within secure boundaries and defend itself.

Drawing on scrupulous, unbiased research and his peerless skills as an advocate, Dershowitz conclusively refutes thirty-two separate slurs, slanders, and misrepresentations that have been hurled at Israel in recent years, including:

In demolishing these charges, Dershowitz documents how Israel was founded with the blessing of the United Nations–and how it was Arabs, not Israelis, who initiated the

cycle of violence that still persists today. He proves that the division of Palestine between Israel and the Palestinians has long been accepted by Israel and rejected by most Arabs. He demonstrates why Israeli actions in the West Bank and Gaza are not motivated by territorial ambitions, but by the very real sense that Israel is under attack. And he shows how critics of Israel gloss over the terrorism, human rights abuses, and antidemocratic ideologies of other regimes in the region, substituting bigotry and veiled anti-Semitism for objective analysis. Well reasoned, hard-hitting, and provocative, The Case for Israel is essential reading for anyone who cares about Israel and the ongoing conflict in the Middle East.

Shipping: US$ 13.72
From United Kingdom to U.S.A.
Destination, rates & speeds

THE CASE FOR ISRAEL