Items related to Writing Ravenna: The Liber Pontificalis of Andreas... 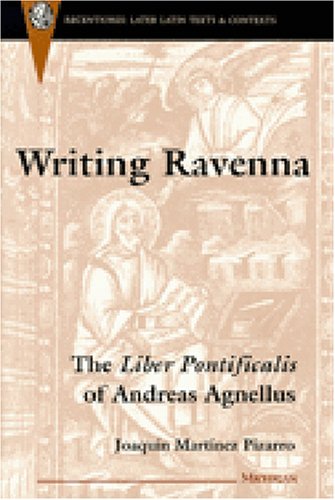 The subject of Writing Ravenna is the Liber Pontificalis Ecclesiae Ravennatis, composed by Agnellus Andreas, a priest of Ravenna, between 830 and 845 C.E. The Liber Pontificalis has often been studied as a source for ecclesiastical and art history, but hardly ever as a literary creation, in spite of its originality and importance.
Writing Ravenna is an attempt to deal with this work's literary significance and specifically with what it tells us about the creation and circulation of narrative in the Early Middle Ages. The book's first chapter analyzes the ways in which the local and international interests of the Ravenna clergy are reflected in the design, genre, and narrative rhetoric of the Liber. The second chapter characterizes the specific textuality, given that the Liber was composed for oral delivery. The final chapter offers translations of the four most interesting narrative sequences in the Liber, followed by full analyses of sources, narrative technique, and ideological aims.
Writing Ravenna will be of interest to a broad spectrum of scholars, including art historians, scholars of late antiquity and the Early Middle Ages, religious historians, and literary critics.
Joaquin Martinez Pizarro is Associate Professor of English, State University of New York at Stony Brook. He is also the author of A Rhetoric of the Scene: Dramatic Narrative in the Early Middle Ages.

Writing Ravenna is the first full-length study of the Liber Pontificalis Ecclesiae Ravennatis, written by the priest Andreas Agnellus in the early ninth century. The Liber Pontificalis was intended as a chronicle of the city of Ravenna, which was successively capital of the late Western empire, of the Ostrogothic kingdom of Italy, and of the Byzantine exarchate of Italy. Ravenna constitutes one of the focal points of the late antique and early medieval world, and Agnellus' chronicle offers unique insights into the beliefs, values, and prejudices that informed an early medieval urban society's view of its past. A central feature of the text is unmatched in the historiography of the period: it reproduces the author's presentation of his work to its original audience and the lively dialogue with his fellow clergymen that accompanied the readings.