A Journal of the Plague Year (Dover Thrift Editions) 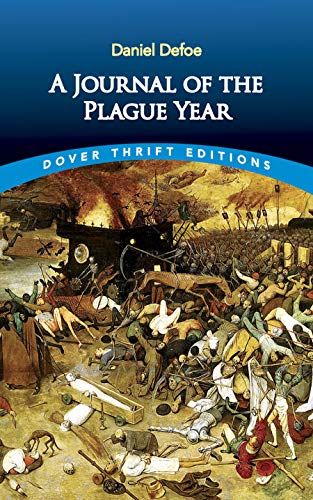 The haunting cry of "Bring out your dead!" by a bell-ringing collector of 17th-century plague victims has filled readers across the centuries with cold terror. The chilling cry survives in historical consciousness largely as a result of this classic 1722 account of the epidemic of bubonic plague — known as the Black Death — that ravaged England in 1664–1665.
Actually written nearly 60 years later by Daniel Defoe, the Journal is narrated by a Londoner named "H. F.," who allegedly lived through the devastating effects of the pestilence and produced this eye witness account. Drawing on his considerable talents as both journalist and novelist, Defoe reconstructed events both historically and fictionally, incorporating realistic, memorable details that enable the novel to surpass even firsthand accounts in its air of authenticity. This verisimilitude is all the more remarkable since Defoe was only five years old when the actual events took place. Long a staple of college literature courses, A Journal of the Plague Year will fascinate students, teachers, and general readers alike.

Defoe's account of the bubonic plague that swept London in 1665 remains as vivid as it is harrowing. Based on Defoe's own childhood memories and prodigious research, A Journal of the Plague Year walks the line between fiction, history, and reportage. In meticulous and unsentimental detail it renders the daily life of a city under siege; the often gruesome medical precautions and practices of the time; the mass panics of a frightened citizenry; and the solitary travails of Defoe's narrator, a man who decides to remain in the city through it all, chronicling the course of events with an unwavering eye. Defoe's Journal remains perhaps the greatest account of a natural disaster ever written.

This Modern Library Paperback Classic is set from the original edition published in 1722.

1. A Journal Of The Plague Year

2. Defoe-Journal of the Plague Year

3. Defoe-Journal of the Plague Year

4. A Journal of the Plague Year (Dover Thrift Editions)

5. A Journal of the Plague Year (Dover Thrift Editions)

6. A JOURNAL OF THE PLAGUE YEAR (DO