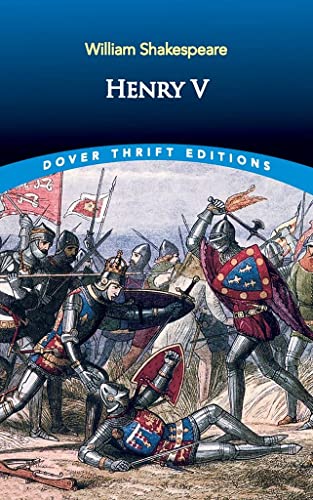 By the time depicted in this play, Henry has turned into the greatest of English kings. Though he has retained the common touch and sense of humor he showed as Falstaff's bosom buddy in the two parts of Henry IV, he has become fiercely focused. He punishes those who have plotted against him; in battle against the French, he shows himself an indomitable leader of men; and, at the end, he conquers even the heart of Catherine, the beautiful daughter of the French king.
Henry V is one of the most popular of Shakespeare's plays — partly because it brings further news of the downward-spiraling fortunes of some of the beloved scoundrels from Henry IV, and partly because it is so intensely patriotic. Who can keep dry-eyed, who can keep his or her heart from welling up, when Henry gives his great speech before the battle of Agincourt?

"He was not of an age, but for all time," declared Ben Jonson of his contemporary William Shakespeare (1564–1616). Jonson's praise is especially prescient, since at the turn of the 17th century Shakespeare was but one of many popular London playwrights and none of his dramas were printed in his lifetime. The reason so many of his works survive is because two of his actor friends, with the assistance of Jonson, assembled and published the First Folio edition of 1623.

Shipping: US$ 19.20
From United Kingdom to U.S.A.
Destination, rates & speeds