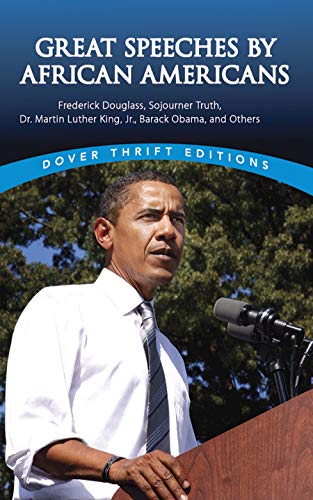 Tracing the struggle for freedom and civil rights across two centuries, this anthology comprises speeches by Frederick Douglass, Sojourner Truth, W. E. B. Du Bois, Martin Luther King, Jr., and other influential figures in the history of African-American culture and politics.
The collection begins with Henry Highland Garnet's 1843 "An Address to the Slaves of the United States of America," followed by Jermain Wesley Loguen's "I Am a Fugitive Slave," the famous "Ain't I a Woman?" speech by Sojourner Truth, and Frederick Douglass's immortal "What, to the Slave, Is the Fourth of July?" Subsequent orators include John Sweat Rock, John M. Langston, James T. Rapier, Alexander Crummell, Booker T. Washington, Mary Church Terrell, Ida B. Wells-Barnett, Francis J. Grimké, Marcus Garvey, and Mary McLeod Bethune. Martin Luther King, Jr.,'s "I Have a Dream" speech appears here, along with Malcolm X's "The Ballot or The Bullet," Shirley Chisholm's "The Black Woman in Contemporary America," "The Constitution: A Living Document" by Thurgood Marshall, and Barack Obama's "Knox College Commencement Address."

James Daley is the editor of several Dover editions, including The World's Greatest Short Stories, Classic Crime Stories, Favorite Christmas Poems,  and Great Writers on the Art of Fiction.

Book Description Paperback. Condition: New. Paperback. This anthology comprises speeches by influential figures in the history of African-American culture and politics. Contents include the famous Ain't I a Woman? speech by Sojourner Truth, Fr.Shipping may be from multiple locations in the US or from the UK, depending on stock availability. 150 pages. 0.127. Seller Inventory # 9780486447612