Items related to A Hero of Our Time (Dover Books on Literature &...

Lermontov, Mikhail A Hero of Our Time (Dover Books on Literature & Drama)

A Hero of Our Time (Dover Books on Literature & Drama) 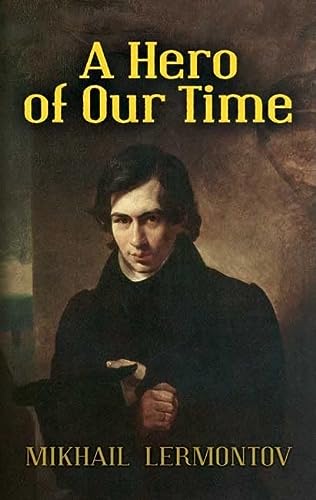 "Of lasting appeal to readers of all countries and centuries." — Vladimir Nabokov
Russian literature's first major prose novel, this gripping work was a primary influence on Tolstoy, Dostoyevsky, and other great nineteenth-century writers. Mikhail Lermontov, "the poet of the Caucasus," drew upon his personal Byronic exploits to create these tales of treachery, abductions, and sexual intrigue. Published in 1840, one year before the author's death at age twenty-six in a duel, the novel retains its overwhelming power and fascination.
Centered on the escapades of Pechorin, a dashing young officer and the hero of the title, the book consists of a series of interconnected short stories. The picaresque adventures revolve around Pechorin's escapades and reflect his cynical but passionate worldview. Set amid the rugged Caucasian wilderness — an exotic land populated by bandits and smugglers, transplanted society women, and lawless freebooters — it offers a thrilling blend of brutality, elegance, and enduring romance.

In its adventurous happenings--its abductions, duels, and sexual intrigues-- 'A Hero Of Our Time' looks backward to the tales of Sir Walter Scott and Lord Byron, so beloved by Russian society in the 1820s and 30s.

1. A Hero of Our Time (Dover Books on Literature Drama)

2. A Hero of Our Time (Dover Books on Literature & Drama)

3. A Hero of Our Time (Dover Books on Literature & Drama)