Items related to Physics for Scientists and Engineers: Chapters 1-39

Physics for Scientists and Engineers: Chapters 1-39 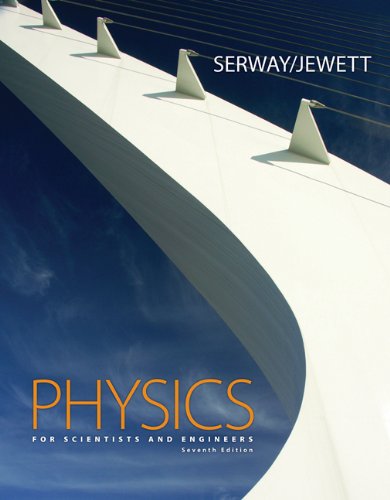 Achieve success in your physics course by making the most of what PHYSICS FOR SCIENTISTS AND ENGINEERS has to offer you. From a host of in-text features to a range of outstanding technology resources, you'll have everything you need to understand the natural forces and principles of physics. Throughout every chapter, the authors have built in a wide range of examples, exercises, and illustrations that will help you understand the laws of physics AND succeed in your course! Available with most new copies of the text is CengageNOW for Physics. Save time, learn more, and succeed in the course with this online suite of resources that give you the choices and tools you need to study smarter and get the grade. Receive a personalized study plan based on chapter-specific diagnostic testing to help you pinpoint what you need to know NOW, and interact with a live physics tutor through the exclusive Personal Tutor with SMARTHINKING program to help you master the concepts.

Raymond A. Serway received his doctorate at Illinois Institute of Technology and is Professor Emeritus at James Madison University. In 2011, he was awarded an honorary doctorate degree from his alma mater, Utica College. He received the 1990 Madison Scholar Award at James Madison University, where he taught for 17 years. Dr. Serway began his teaching career at Clarkson University, where he conducted research and taught from 1967 to 1980. He was the recipient of the Distinguished Teaching Award at Clarkson University in 1977 and the Alumni Achievement Award from Utica College in 1985. As Guest Scientist at the IBM Research Laboratory in Zurich, Switzerland, he worked with K. Alex Müller, 1987 Nobel Prize recipient. Dr. Serway also was a visiting scientist at Argonne National Laboratory, where he collaborated with his mentor and friend, the late Sam Marshall. In addition to PHYSICS FOR SCIENTISTS AND ENGINEERS, Dr. Serway is the coauthor of PRINCIPLES OF PHYSICS, Fifth Edition; COLLEGE PHYSICS, Ninth Edition; ESSENTIALS OF COLLEGE PHYSICS; MODERN PHYSICS, Third Edition; and the high school textbook PHYSICS, published by Holt McDougal. In addition, Dr. Serway has published more than 40 research papers in the field of condensed matter physics and has given more than 60 presentations at professional meetings. Dr. Serway and his wife Elizabeth enjoy traveling, playing golf, fishing, gardening, singing in the church choir, and especially spending quality time with their four children, nine grandchildren, and a recent great-grandson.

1. Physics for Scientists and Engineers: Chapters 1-39

3. Physics for Scientists and Engineers: Chapters 1-39