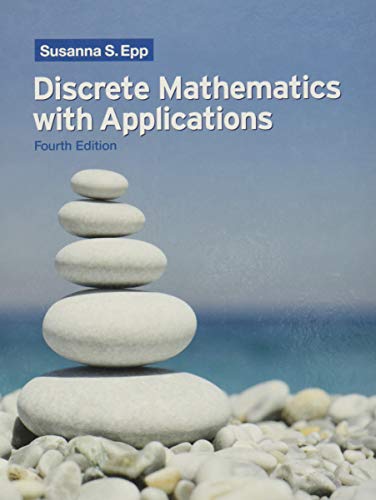 Susanna Epp's DISCRETE MATHEMATICS WITH APPLICATIONS, FOURTH EDITION provides a clear introduction to discrete mathematics. Renowned for her lucid, accessible prose, Epp explains complex, abstract concepts with clarity and precision. This book presents not only the major themes of discrete mathematics, but also the reasoning that underlies mathematical thought. Students develop the ability to think abstractly as they study the ideas of logic and proof. While learning about such concepts as logic circuits and computer addition, algorithm analysis, recursive thinking, computability, automata, cryptography, and combinatorics, students discover that the ideas of discrete mathematics underlie and are essential to the science and technology of the computer age. Overall, Epp's emphasis on reasoning provides students with a strong foundation for computer science and upper-level mathematics courses.

Book Description Cengage Learning, 2010. soft cover. Condition: New. International Edition. No supplemental materials. International Editions may have a different cover or ISBN but generally have the exact same content as the US edition, just at a more affordable price. In some cases, end of chapter questions may vary slightly from the US edition. International Editions are typically printed in grayscale, and likely will not have any color throughout the book. New. Books ship from multiple locations depending on availability. All orders are shipped with tracking information. We take pride in our customer service. Please contact us if you have any questions regarding this listing. Seller Inventory # 13837

Book Description Cengage Learning, 2010. Softcover. Condition: New. ***International Edition***Soft cover/Paperback*** Textbook printed in English. ***Brand New***. Most international edition has different ISBN and Cover design. Some book may show sales disclaimer such as "Not for Sale or Restricted in US" on the cover page but it is absolutely legal to use. All textbook arrives within 5-7business days. Please provides valid phone number with your order for easy delivery. Seller Inventory # 9780495391326