Items related to Culture and Values, Volume II: A Survey of the Humanities...

Culture and Values, Volume II: A Survey of the Humanities with Readings (with Resource Center Printed Access Card) 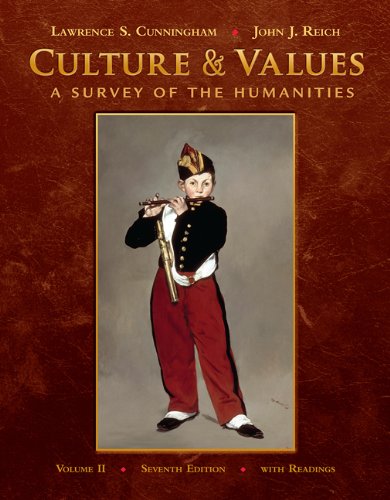 Large course taught nationwide, but especially large in Florida, Texas, and California. Usually a popular elective but required of all incoming students at some schools. Annual enrollments in the course and current TL market share.

Lawrence S. Cunningham is John A. O'Brien Professor of Theology (Emeritus) at the University of Notre Dame. The author or editor of over 25 books and hundreds of essays and reviews, his books reflect his interest in the history of Christian spirituality, hagiography, the intersection of theology and culture, as well as the relationship of contemplation and action. Cunningham is the recipient of three honorary doctorates and the winner of Notre Dame's Presidential Award for service to academy and church (2002) and the Christus Magister award from the University of Portland in 2011 for distinguished scholarship and teaching. He has served as a visiting lecturer in this country and in Europe, Asia, and South Africa. His most recent academic book is INTRODUCTION TO CATHOLICISM (Cambridge University Press, 2010) and is currently serving as the Christianity editor for the forthcoming NORTON ANTHOLOGY OF WORLD RELIGIONS.

A native of England, John J. Reich was trained as a classical archaeologist and did both his undergraduate and graduate work at the University of Manchester. He is an authority on Minoan civilization, pre-Roman Italy, and music. Professor Reich is associated with the Syracuse University study program in Florence, Italy. Reich lectures frequently in Europe and the United States on history, art, and the humanities and is the author of many scholarly articles and several books, including ITALY BEFORE ROME (1979).

1. Culture and Values, Volume II: A Survey of the Humanities with Readings (with Resource Center Printed Access Card)

2. Culture and Values, Volume II: A Survey of the Humanities with Readings (with Resource Center Printed Access Card)