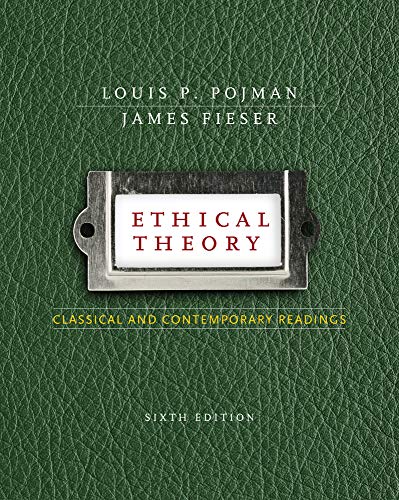 This authoritative and reader-friendly anthology will help you think through some of humanity's most persistent questions regarding right and wrong, good and bad. ETHICAL THEORY: CLASSICAL AND CONTEMPORARY READINGS cuts through the confusion and delivers a clear and comprehensive selection of readings from classical and contemporary sources. Presented in a dynamic pro and con format, with detailed summaries of each argument, this comprehensive anthology allows you to watch the ethical debate unfold before your eyes.

Book Description Wadsworth Publishing, 2010. Paperback. Condition: Acceptable. CONTAINS WATER DAMAGE / STAIN, STILL VERY READABLE, SAVE! Please note that items may contain writing and/or highlighting and may not include CDs, access cards, or other supplementary material. We are not able to ship internationally. Your satisfaction is guaranteed! Items ship in quality packaging within 3 business days. Seller Inventory # mon0000326382

Book Description Wadsworth, 2010. Condition: Good. 6 Edition. Shows some signs of wear, and may have some markings on the inside. Seller Inventory # 8888531-75

Book Description Cengage Learning, 2010. Paperback. Condition: Good. 6th Edition. Ships in a BOX from Central Missouri! May not include working access code. Will not include dust jacket. Has used sticker(s) and some writing or highlighting. UPS shipping for most packages, (Priority Mail for AK/HI/APO/PO Boxes). Seller Inventory # 000938402U