Items related to A People and a Nation: A History of the United States,...

A People and a Nation: A History of the United States, Volume 2, 9th Edition 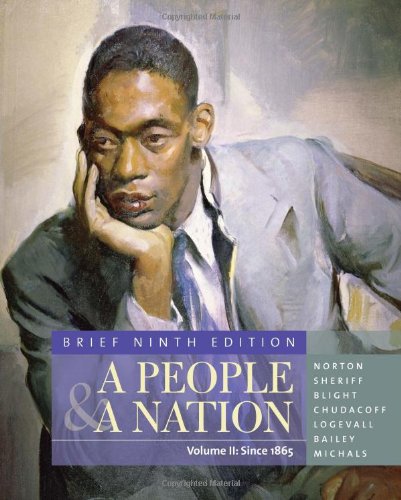 The Brief Edition of A PEOPLE AND A NATION offers a succinct and spirited narrative that tells the stories of all people in the United States. The authors' attention to race and racial identity and their inclusion of everyday people and popular culture brings history to life, engaging readers and encouraging them to imagine what life was really like in the past.

Mary Beth Norton, the Mary Donlon Alger Professor of American History at Cornell University, received her B.A. from the University of Michigan and her Ph.D. from Harvard University. She teaches courses in the history of exploration, early America, women's history, Atlantic world, and American Revolution. Her many books have won prizes from the Society of American Historians, Berkshire Conference of Women Historians, and English-Speaking Union. Her book, FOUNDING MOTHERS & FATHERS (1996), was a finalist for the Pulitzer Prize. In 2011 her book SEPARATED BY THEIR SEX: WOMEN IN PUBLIC AND PRIVATE IN THE COLONIAL ATLANTIC WORLD was published. She was Pitt Professor of American History at the University of Cambridge in 2005-2006. The Rockefeller Foundation, Guggenheim Foundation, and Huntington Library, among others, have awarded her fellowships. Professor Norton has served on the National Council for the Humanities and is an elected member of the American Academy of Arts and Sciences. She has appeared on Book TV, the History and Discovery Channels, PBS, and NBC as a commentator on Early American history.

Carol Sheriff received her B.A. from Wesleyan University and her Ph.D. from Yale University. She has taught at the College of William and Mary since 1993, where she has won the Thomas Jefferson Teaching Award, the Alumni Teaching Fellowship Award, and the University Professorship for Teaching Excellence. Carol teaches the U.S. history survey as well as classes on the Early Republic, the Civil War Era, and the American West. Her publications include THE ARTIFICIAL RIVER: THE ERIE CANAL AND THE PARADOX OF PROGRESS (1996), which won the Dixon Ryan Fox Award from the New York State Historical Association and the Award for Excellence in Research from the New York State Archives, and A PEOPLE AT WAR: CIVILIANS AND SOLDIERS IN AMERICA'S CIVIL WAR, 1854-1877 (with Scott Reynolds Nelson, 2007). Carol has written sections of a teaching manual for the New York State history curriculum, given presentations at Teaching American History grant projects, appeared in the History Channel's Modern Marvels show on the Erie Canal, and is engaged in several public history projects marking the sesquicentennial of the Civil War.

David W. Blight received his B.A. from Michigan State University and his Ph.D. from the University of Wisconsin. He is Class of 1954 Professor of American History and director of the Gilder Lehrman Center for the Study of Slavery, Resistance, and Abolition at Yale University. He has written FREDERICK DOUGLASS'S CIVIL WAR (1989) and RACE AND REUNION: THE CIVIL WAR IN AMERICAN MEMORY, 1863-1915 (2001), which received eight awards, including the Bancroft Prize, the Frederick Douglass Prize, the Abraham Lincoln Prize, and four prizes awarded by the Organization of American Historians. His most recent book, A SLAVE NO MORE: THE EMANCIPATION OF JOHN WASHINGTON AND WALLACE TURNAGE (2007), won three prizes. He has edited or co-edited six other books, and his essays have appeared in numerous journals. In 1992-1993 he was senior Fulbright Professor in American Studies at the University of Munich, Germany, and in 2006-2007 he held a fellowship at the Dorothy and Lewis B. Cullman Center, New York Public Library. A consultant to several documentary films, David appeared in the 1998 PBS series, Africans in America and has served on the Council of the American Historical Association.

Howard P. Chudacoff, the George L. Littlefield Professor of American History and Professor of Urban Studies at Brown University, was born in Omaha, Nebraska. He earned his A.B. (1965) and Ph.D. (1969) from the University of Chicago. He has written MOBILE AMERICANS (1972), HOW OLD ARE YOU (1989), THE AGE OF THE BACHELOR (1999), THE EVOLUTION OF AMERICAN URBAN SOCIETY (with Judith Smith, 2004), and CHILDREN AT PLAY: AN AMERICAN HISTORY (2007). He has also co-edited, with Peter Baldwin, MAJOR PROBLEMS IN AMERICAN URBAN HISTORY (2004). His articles have appeared in such journals as the JOURNAL OF FAMILY HISTORY, REVIEWS IN AMERICAN HISTORY, and JOURNAL OF AMERICAN HISTORY. At Brown University, Howard has co-chaired the American Civilization Program, chaired the Department of History, and serves as Brown's faculty representative to the NCAA. He has also served on the board of directors of the Urban History Association. The National Endowment for the Humanities, Ford Foundation, and Rockefeller Foundation have given him awards to advance his scholarship.

Fredrik Logevall is John S. Knight Professor of International Studies and Professor of History at Cornell University, where he serves as director of the Mario Einaudi Center for International Studies. He received his B.A. from Simon Fraser University and his Ph.D. from Yale University. His most recent book is AMERICA'S COLD WAR: THE POLITICS OF INSECURITY (with Campbell Craig, 2009). His other publications include CHOOSING WAR (1999), which won three prizes, including the Warren F. Kuehl Book Prize from the Society for Historians of American Foreign Relations (SHAFR); THE ORIGINS OF THE VIETNAM WAR (2001); TERRORISM AND 9/11: A READER (2002); as coeditor, the ENCYCLOPEDIA OF AMERICAN FOREIGN POLICY (2002); and, as co-editor, THE FIRST VIETNAM WAR: COLONIAL CONFLICT AND COLD WAR CRISIS (2007). Fred is a recipient of the Stuart L. Bernath article, book, and lecture prizes from SHAFR and is a member of the SHAFR Council, the Cornell University Press faculty board, and the editorial advisory board of the Presidential Recordings Project at the Miller Center of Public Affairs at the University of Virginia. In 2006-2007, he was Mellon Senior Fellow at the University of Cambridge.

1. A People and a Nation: A History of the United States, Volume 2, 9th Edition

3. A People and a Nation: A History of the United States, Volume 2, 9th Edition

4. A People and a Nation: A History of the United States, Volume 2, 9th Edition

5. A People and a Nation: A History of the United States, Volume 2, 9th Edition