Items related to Costume and Fashion: A Concise History (World of Art)

Costume and Fashion: A Concise History (World of Art) 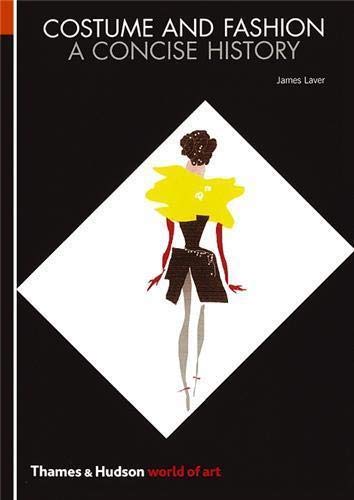 \The vagaries of fashion throughout the ages are a source of endless interest, not only as indication of our infinite capacity for invention, but also because of the relationship of costume to shifting cultural patterns. Laver presents in this classic study the underlying motives of fashion as well as a survey of the history of costume. He describes the means which have been adopted to satisfy the three functions of clothes: protection, expression of the personality by sartorial display, and attractiveness to others. The momentous invention of the needle (some 40,000 years ago), making possible the sewing together of pelts, and the subsequent introduction of weaving, launched the development of costume as we know it. All the major historical landmarks -- the Renaissance, the French Revolution, the Industrial Revolution, the emancipation of women, the two world wars -- wrought profound changes in attitudes to dress: with matchless skill and panache Laver related the development of costume and fashion to these social changes. A new final chapter by Christina Probert brings the history up to the present day [sic] with a detailed discussion of the enormous variety of postwar styles, including the New Look, the mini, and punk-influenced clothes. James Laver (1899-1975) was keeper of the Departments of Prints and Drawings and of Paintings at the Victoria and Albert Museum, London, from 1938 until 1959. He was also an important and pioneering fashion historian described as “the man in England who made the study of costume respectable”. Laver is perhaps best remembered for his contributions to the field of fashion history, an interest in which emerged through a desire to date images accurately through the clothing depicted within. Laver defined the relationships between dress design and other applied arts, and discussed the influence of economic and social factors upon the development of fashionable taste.

The late James Laver was Keeper of the Departments of Prints and Drawings and of Paintings at the Victoria and Albert Museum from 1938 until 1959.

Amy de la Haye is an expert dress historian. She is the Rootstein Hopkins chair of dress history & curatorship at London College of Fashion.

Andrew Tucker is a fashion writer, author of The London Fashion Book and co-author of Costume and Fashion.

“A standard reference for anyone interested in the history of style and clothes.”
- Art & Antiques

1. Costume and Fashion: A Concise History (World of Art)

2. Costume and Fashion: A Concise History (World of Art)

3. Costume and Fashion: A Concise History (World of Art)

4. COSTUME AND FASHION: A CONCISE H