Items related to A Little Fate 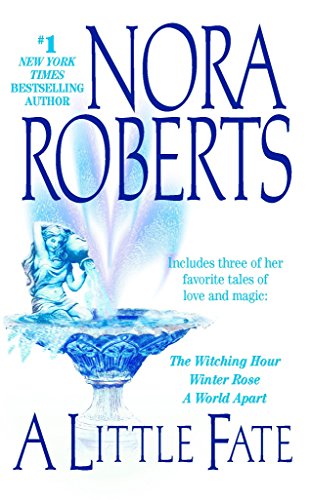 #1 New York Times bestselling author Nora Roberts presents three of her favorite tales of love and magic—together in one volume for the first time.

A kingdom is plagued by tragedy until a wizard-god’s spell brings forth a courageous and beautiful young woman who must follow her heart in love and follow her destiny in battle...

A young queen heals a wounded soldier on a remote island cursed with eternal winter—and warms her heart with the joys of true love...

A ravishing medieval Demon Slayer arrives in 20th century New York to brave a strange new world—and a man who will be her destiny...

Nora Roberts is the #1 New York Times bestselling author of more than 200 novels. She is also the author of the bestselling In Death series written under the pen name J. D. Robb. There are more than 500 million copies of her books in print.

“Roberts is indeed a word artist, painting her story and her characters with vitality and verve.”—Los Angeles Daily News

Shipping: US$ 62.21
From United Kingdom to U.S.A.
Destination, rates & speeds