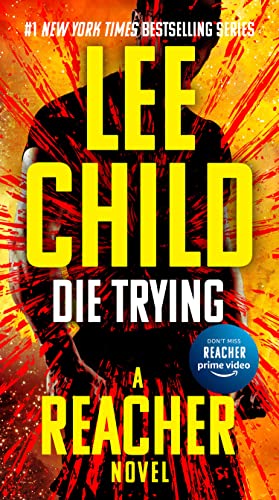 Jack Reacher is an innocent bystander when he witnesses a woman kidnapped off a Chicago street in broad daylight. In the wrong place at the wrong time, he’s kidnapped with her. Chained together, locked in the back of a stifling van, and racing across America to an unknown destination for an unknown purpose, they’re at the mercy of a group of men demanding an impossible ransom. Because this mysterious woman is worth more than Reacher ever suspected. Now he has to save them both—from the inside out—or die trying...

Television writer Lee Child's otherwise riveting first thriller, Killing Floor, was criticized by some reviewers because of an unconvincing coincidence at its center. Child addresses that problem in his second book--and thumbs his nose at those reviewers--by having his hero, ex-military policeman Jack Reacher, just happen to be walking by a Chicago dry cleaner when an attractive young FBI agent named Holly Johnson comes out carrying nine expensive outfits and a crutch to support her soccer-injured knee. As Holly stumbles, Reacher grabs her and her garments--which gets him kidnapped along with her by a trio of very determined badguys. "He had no problem with how he had gotten grabbed up in the first place," Child writes. "Just a freak of chance had put him alongside Holly Johnson at the exact time the snatch was going down. He was comfortable with that. He understood freak chances. Life was built out of freak chances, however much people would like to pretend otherwise." Lucky for Holly--whose father just happens to be an Army general and current head of the Joint Chiefs of Staff, thus making her a tempting target for a bunch of Montana-based extremists--Reacher still has all the skills and strengths associated with his former occupation. And Child still knows how to write scenes of violent action better than virtually anyone else around. --Dick Adler