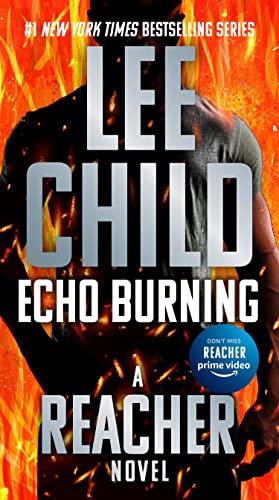 Thumbing across the scorched Texas desert, Jack Reacher has nowhere to go and all the time in the world to get there. Cruising the same stretch of two-lane blacktop is Carmen Greer. For Reacher, the lift comes with a hitch. Carmen’s got a wild story to tell—all about her husband, her family secrets, and a hometown that’s purely gothic. She’s also got a plan. Reacher’s part of it. And before the sun sets, this ride could cost them both their lives.

Jack Reacher is Spenser before Robert Parker domesticated his Boston PI--in fact, Reacher's even tougher than Hawk. He can inhale and exhale a few times and pump up his muscles so they make a bad character think twice about tangling with him. And he's spent enough time on the right side of the law to know how to operate in the gray zone if that's what it takes to save the fair maiden, punish the bad guys, and right any other wrongs he happens to encounter in the course of his wanderings. Echo Burning is vintage Lee Child, a smartly paced, intricately plotted, and masterfully characterized thriller starring Reacher, the ex-military cop who's so concerned about commitment to anything--a woman, possessions, a permanent address--that he only owns the clothes on his back. But he's the kind of justice-seeking guy you'd want on your side, especially if you were an abused wife trapped in a marriage you can't get out of until, and unless, somebody bumps off your old man.

Reacher's sympathetic, but he's not crazy. Nonetheless, he allows himself to be drawn into beautiful Carmen Greer's orbit, which ought to teach a guy not to hitchhike. Agreeing to protect her from the husband who's about to be released from jail and, according to Carmen, who's about to pay her back for tipping off the authorities to the tax fraud that landed him in prison, Reacher moves into the bunkhouse of the Echo, Texas, ranch that's owned by the bigoted, bitter, but powerful Greer family, which despises Carmen because she's Mexican and tolerates her only because she's Sloop Greer's wife and the mother of his child. The expected bloodshed ensues, but it's Sloop, not Carmen, who ends up with a bullet in his head. Reacher's convinced that Carmen acted in self-defense, even after other evidence comes to light that suggests there's more--and less--to her unhappy tale than even her own lawyer believes. This is the best Jack Reacher yet, smart, stylish, and convincing. If it's your first encounter with Child's work, be sure to check out his backlist--Running Blind, Tripwire, etc. --Jane Adams

Lee Child is #1 New York Times bestsellling author of the Jack Reacher thrillers and the complete Jack Reacher story collection, No Middle Name. All his novels have been optioned for major motion pictures—including Jack Reacher (based on One Shot) and Jack Reacher: Never Go Back. A native of England and a former television director, Child lives in New York City.