Items related to Encyclopedia Of Jazz 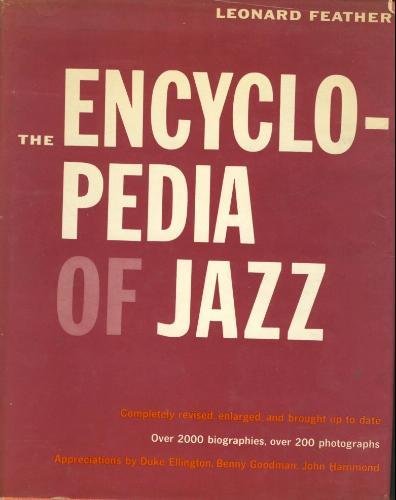 The first appearance of Leonard Feather's Encyclopedia of Jazz was heralded by critics, musicians, and record collectors as a major contribution to the literature of jazz. Never before had America's native music been treated so meticulously, objectively, and comprehensively. The appearance of two later volumes, The Encyclopedia of Jazz in the Sixties and The Encyclopedia of Jazz in the Seventies (with Ira Gitler) only confirmed the initial enthusiasm and the judgement that here were basic books for any music library.This marks the first paperback publication of this book, soon to be followed by paperback editions of the other two volumes. With more than 2,000 biographies and 200 photos, it spans the history of jazz from its origins to 1959. But more than a biographical dictionary, the book also features essays on the jazz tradition, its major players and composers, the relationship between jazz and classical music (written by Gunther Schuller), a social history of jazz in America, the jazzman as critic, and a grammar of jazz language that can serve as an ideal introduction for young listeners. In addition, Leonard Feather provides a chronology, list of international critic polls, musicians birthdays and birthplaces, a bibliography, and a discography of recommended recordings. For anyone seriously--or even casually--interested in the development of jazz and blues, this classic reference work can guide you unerringly through the many dimensions of the music's wonderful history.

Leonard Feather is one of the handful of indispensable jazz critics. His many books include From Satchmo to Miles, Inside Jazz, Laughter from the Hip (with Jack Tracy), all published by Da Capo Press/Perseus Book Group, and the Pleasures of Jazz, along with other works. Composer, pianist, record producer, critic, he remains a vital presence on the jazz scene.