Items related to The Coldest War 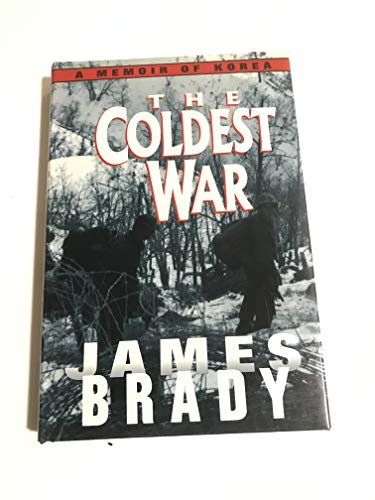 A personal account of the Korean War, as chronicled by a young Marine lieutenant, describes the harsh realities of war, the pressures of command, the struggle for survival, and the tragic impact of the war on all Americans

Praise for The Coldest War:

"War reporting at its best - a graphic depiction, in all its horror, of the war we've almost forgotten... Jim Brady has used his finely honed reportorial skills to record his own front-line experiences in the Korean War. His story reads like a novel."
- Walter Cronkite

"A marvelous memoir. A sensitive and superbly written narrative that eventually explodes off the pages like a grenade in the gut... Taut, tight, and telling. Jim Brady proves again that he is one of the most underrated writers in American books."
- Dan Rather

"It is about time somebody wrote about the personal side of the Korean War - the forgotten war. It is a gripping and honest book. Everyone prone to think simply about war should read it."
- Jim Lehrer

James Brady is the author of Further Lane, Gin Lane, The House That Ate The Hamptons, and The Marines of Autumn. His weekly columns for Advertising Age and Parade magazines were considered must-reads by millions. He lived in Manhattan and in East Hampton, New York.

The Coldest War - A Memoir of Korea