Items related to Ribbentrop: A Biography 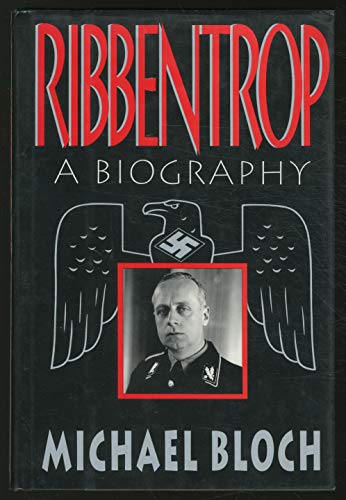 An insightful look into the Third Reich examines the life of Nazi diplomat Joachim von Ribbentrop, an influential member of Hitler's inner circle. By the author of Wallis and Edward: Letters 1931-1937.15,000 first printing. National ad/promo.

Powerful study of a life in Hitler's service, by Bloch (The Secret File of the Duke of Windsor, 1989, etc.). Bloch's young Ribbentrop is a shallow, friendly man of the middle class, characterized in early manhood by a love of sports and music, excellent manners, and snobbery (he added a phony ``von'' to his name). Son of a career officer, his education was slighted, but he traveled (as far as Canada) and made friends outside Germany, and his liquor-importing business strengthened these connections. Bloch makes clear that, into the early 30's, Ribbentrop was liberal in outlook, with Jewish friends, and that his international experience and personal finesse, rare in Nazi circles, were prized beyond their worth by Hitler, who assumed they indicated real sophistication. Ribbentrop acquired recognition by assisting in the maneuvers that made Hitler chancellor, and, in 1938, he was appointed Germany's foreign minister. He had diplomatic aspirations but neither gifts nor training and, as Bloch indicates, career diplomats of all nationalities abhorred him. Familiarity with the period and its major figures allows Bloch to present a detailed example of how Nazi Germany operated: Using Ribbentrop the social-climber, Hitler undermined and spied on the distrusted diplomatic service. Ongoing rivalries with Goebbels, Goering, and other Nazis represented here reveal a world in which everyone was set against everyone else by the master, and in which everything depended on his whim. Ribbentrop, acclimated to domination by his wife, was good at the game, debasing himself to the point where he was completely dependent on Hitler's approval for his state of mind. By the time Germany occupied Norway, Ribbentrop had become a raging anti-Semite--a changed man whose harangues in delicate diplomatic situations rivalled those of Hitler himself. Bloch controls his material expertly, balancing personal and historic elements to produce a fascinating, cautionary tale. (Sixteen-page b&w photo insert--not seen) -- Copyright ©1993, Kirkus Associates, LP. All rights reserved.

Joachim von Ribbentrop, Hitler's foreign minister, played a prominent but by no means essential role in the formation of the Rome-Berlin Axis and the 1939 Nazi-Soviet nonaggression pact, we're reminded here. Additionally, he took part in planning the attack on Poland that set off WW II. Bloch also introduces new material about Ribbentrop's role in Hitler's 1933 ascension to power, his tenure as German ambassador in London (alienating much of the British populace with his arrogance), his participation in anti-Jewish policies as foreign minister and his harebrained scheme to kidnap the Duke of Windsor. This involving, revealing biography of Hitler's yes-man makes clear that Ribbentrop was wanting in character and ideas and that his pompous manner made him an international buffoon. Still unanswered is the question of why Hitler retained him in such an important post. Ribbentrop was convicted at Nuremberg and hanged as a war criminal in 1946. Bloch is the author of The Secret File of the Duke of Windsor.
Copyright 1993 Reed Business Information, Inc.