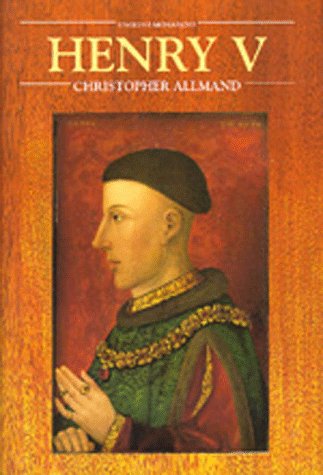 Thanks to Shakespeare, Henry V is one of England's best-known monarchs. Or is he? The image of the young king leading his army against the French and his stunning victory at Agincourt are part of English historical tradition. Yet to understand Henry V we need to look at far more than his military prowess.

While Henry was indeed a soldier of exceptional skills, his historical reputation as a king deserves to be set against a broader background of achievement, for he was a leader and a diplomat, an administrator, a keeper of the peace and protector of the Church, a man who worked with and for his people.

This new study, the first full scholarly biography of Henry V, based on the primary sources of both English and French archives and taking into account a great deal of recent scholarship, shows his reign in the broad European context of his day. It concludes that, through his personality and "professional" approach, Henry not only united the country in war but also provided England with a sense of pride and the kind of domestic rule it was so in need of at the time.

Allmand offers far more than a biography of a king. His book is also a rich work of cultural history, with fascinating material on, for example, royal funerals, the reburial of Richard II in Westminster Abbey, the rise of Lollardy in England, and how one governed in the late Middle Ages.

Christopher Allmand is Professor of History at the University of Liverpool. His previous books include Lancastrian Normandy, 1415-1450 and The Hundred Years War.

In this volume, we are presented with an in-depth and generally balanced portrait of the monarch who is best remembered for his success at the Battle of Agincourt (1415). However, as Allmand (Univ. of Liverpool) shows, Henry V was a versatile, capable ruler whose achievements in many areas were of lasting significance. Like most of its predecessors in the "English Monarchs" series, this work is written in a style designed to appeal not only to scholars but to general readers. Undergraduate students of British history, in particular, will be beneficiaries of this work. Deeply researched and well written, this is now the standard biography of Henry V.
- James A. Casada, Winthrop Univ., Rock Hill, S.C.
Copyright 1993 Reed Business Information, Inc.