Items related to Lost Names: Scenes from a Korean Boyhood 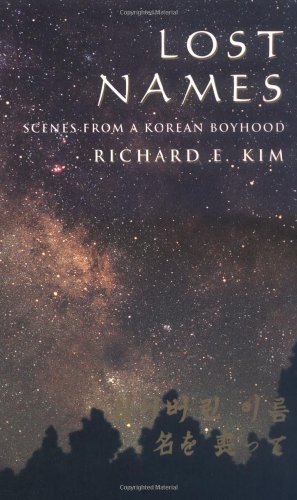 In this classic tale, Richard Kim paints seven vivid scenes from a boyhood and early adolescence in Korea at the height of the Japanese occupation, 1932 to 1945. Taking its title from the grim fact that the occupiers forced the Koreans to renounce their own names and adopt Japanese names instead, the book follows one Korean family through the Japanese occupation to the surrender of the Japanese empire. Lost Names is at once a loving memory of family and a vivid portrayal of life in a time of anguish.

From 1932 to 1945, the Japanese occupied Korea. Organized in seven vivid scenes, Kim's fictionalized memoir tells the story of one family's experience, as told by the boy. The narrative starts in 1933 with a dramatic iced-river crossing into Manchuria, when the boy was just a year old, a story the boy knows from the many times his mother has told him the tale. Next scene and we're in 1938. The boy and his family have moved back to Korea, where the boy is the new boy in school and is learning new routines like bowing his head toward where the Japanese emperor is supposed to be in Tokyo. He does as he is told, but wonders if the emperor knows the children are bowing to him, wonders if he's asleep, or eating breakfast--or maybe even in the toilet. He pictures someone knocking on the door, saying, "Your Majesty! The children, the children! They are bowing to Your Majesty!" and him saying, "Wait a minute! I have my pants down!"

A few years later, the children are told they need new names--the Koreans must renounce their family names and take Japanese ones instead. Later, his father takes him to the cemetery to ask forgiveness from their ancestors for the humiliation of losing their names. The scenes continue as the boy grows up, mingling the experiences of childhood with the history of the occupation, seen in the small day-to-day moments that bring history alive. Richard Kim uses a simple but powerful voice to evoke painful times, a loving family, and a strong spirit of survival. Lost Names is a beautifully written tribute to the people of Korea that is subtle, moving, and hard to put down.

Richard E. Kim (1932 - 2009) was a celebrated novelist, essayist, documentary filmmaker, and professor of literature at University of Massachusetts at Amherst, Syracuse University, San Diego State University, and at Seoul National University. He was founder and president of Trans-Lit Agency, a literary agency devoted to establishing international copyright for works being published in Korea. His books include The Martyred (nominated for the National Book Award), The Innocent , and Lost Koreans in China and the Soviet Union: Photo Essays . He was recipient of the Ford Foundation Foreign Area Fellowship, a Guggenheim Fellowship, and a National Endowment for the Arts Literary Fellowship.