Items related to Damned Lies and Statistics: Untangling Numbers from...

Damned Lies and Statistics: Untangling Numbers from the Media, Politicians, and Activists 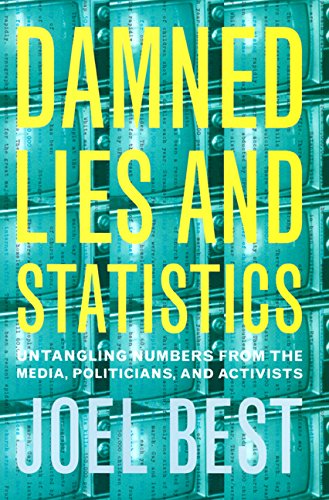 Does the number of children gunned down double each year? Does anorexia kill 150,000 young women annually? Do white males account for only a sixth of new workers? Startling statistics shape our thinking about social issues. But all too often, these numbers are wrong. This book is a lively guide to spotting bad statistics and learning to think critically about these influential numbers. Damned Lies and Statistics is essential reading for everyone who reads or listens to the news, for students, and for anyone who relies on statistical information to understand social problems.

Joel Best bases his discussion on a wide assortment of intriguing contemporary issues that have garnered much recent media attention, including abortion, cyberporn, homelessness, the Million Man March, teen suicide, the U.S. census, and much more. Using examples from the New York Times, the Washington Post, and other major newspapers and television programs, he unravels many fascinating examples of the use, misuse, and abuse of statistical information.

In this book Best shows us exactly how and why bad statistics emerge, spread, and come to shape policy debates. He recommends specific ways to detect bad statistics, and shows how to think more critically about "stat wars," or disputes over social statistics among various experts. Understanding this book does not require sophisticated mathematical knowledge; Best discusses the most basic and most easily understood forms of statistics, such as percentages, averages, and rates.

This accessible book provides an alternative to either naively accepting the statistics we hear or cynically assuming that all numbers are meaningless. It shows how anyone can become a more intelligent, critical, and empowered consumer of the statistics that inundate both the social sciences and our media-saturated lives.

When it comes to thinking about statistics, there are four kinds of people: awestruck, naive, cynical, and critical. According to sociologist Joel Best, the vast majority of people are naive (yes, you too probably suffer from a mild case of innumeracy), and the result is mutant statistics, guesswork, and poor policy decisions. "Bad statistics live on," writes Best in this highly accessible book, "they take on lives of their own." Take this one: a psychologist's estimate that perhaps 6 percent of priests were at some point sexually attracted to young people was transformed through a chain of errors into the "fact" that 6 percent of priests were pedophiles. Then there was the one about eating disorders. An original estimate that 150,000 women were anorexic, made by concerned activists, mutated into 150,000 women dying from the disorder annually (the truth: about 70 women a year). But these two mutant statistics have been published and passed along as facts for years, enduring long after the truth has been pointed out.

In an effort to turn people into critical thinkers, Best presents three questions to ask about all statistics and the four basic sources of bad ones. He shows how good statistics go bad; why comparing statistics from different time periods, groups, etc. is akin to mixing apples and oranges; and why surveys do little to clarify people's feelings about complex social issues. Random samples, it turns out, are rarely random enough. He also explains what all the hoopla is over how the poverty line is measured and the census is counted. What is the "dark figure"? How many men were really at the Million Man March? How is it possible for the average income per person to rise at the same time the average hourly wage is falling? And how do you discern the truth behind stat wars? Learn it all here before you rush to judgment over the next little nugget of statistics-based truth you read. --Lesley Reed

"[An] absolutely fascinating and sobering quest into the fantastic differences between the world as it is and the world as it is portrayed in the statistics the media use. . . .This book is simply a must."—Nachman Ben-Yehuda, author of The Masada Myth

"Best is our leading authority on social problems today. His detective work in exposing the spurious use of statistics is essential to constructive social science. No one who speaks for the public welfare can ignore his powerful work."—Jonathan B. Imber, Editor-in-Chief, Society

"Joel Best is at it again. In Damned Lies and Statistics, he shows how statistics are manipulated, mismanaged, misrepresented, and massaged by officials and other powerful groups to promote their agendas. He is a master at examining taken-for-granted "facts" and debunking them through careful sociological scrutiny."—Patricia Adler, author of Peer Power

"A real page turner. Best is the John Grisham of sociology!"—James Holstein, author of The New Language of Qualitative Method

"In our era, numbers are as much a staple of political debates as stories. And just as stories so often turn into fables, so Best shows that we often believe the most implausible of numbers--to the detriment of us all."—Peter Reuter, co-author of Drug War Heresies: Learning from Other Vices,Times and Places

1. Damned Lies and Statistics: Untangling Numbers from the Media, Politicians, and Activists

2. Damned Lies and Statistics: Untangling Numbers from the Media, Politicians, and Activists

3. Damned Lies and Statistics: Untangling Numbers from the Media, Politicians, and Activists

4. Damned Lies and Statistics: Untangling Numbers from the Media, Politicians, and Activists

Book Description University of California Press, 2001. Hardcover. Condition: New. Dust Jacket Condition: New. Book is brand new and has never been cracked open. Dust jacket is new and protected by a brand new, clear, acid-free mylar cover. We add mylar covers to all books with DJs to preserve the DJs and add luster to magnify their beauty. (If pictured, shown without the mylar cover for an accurate representation of dust jacket. ) ; 8.4 X 5.9 X 0.8 inches; 190 pages. Seller Inventory # 2030

6. Damned Lies and Statistics: Untangling Numbers from the Media, Politicians, and Activists

7. Damned Lies and Statistics: Untangling Numbers from the Media, Politicians, and Activists