Items related to Terror in the Mind of God: The Global Rise of Religious...

Juergensmeyer, Mark Terror in the Mind of God: The Global Rise of Religious Violence (Comparative Studies in Religion and Society)

Terror in the Mind of God: The Global Rise of Religious Violence (Comparative Studies in Religion and Society) 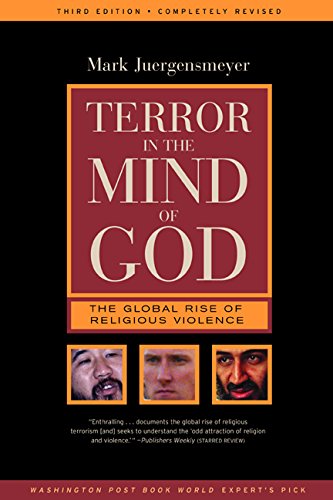 Completely revised and updated, this new edition of Terror in the Mind of God incorporates the events of September 11, 2001 into Mark Juergensmeyer's landmark study of religious terrorism. Juergensmeyer explores the 1993 World Trade Center explosion, Hamas suicide bombings, the Tokyo subway nerve gas attack, and the killing of abortion clinic doctors in the United States. His personal interviews with 1993 World Trade Center bomber Mahmud Abouhalima, Christian Right activist Mike Bray, Hamas leaders Sheik Yassin and Abdul Azis Rantisi, and Sikh political leader Simranjit Singh Mann, among others, take us into the mindset of those who perpetrate and support violence in the name of religion.

"By studying different 'cultures of violence' Mark Juergensmeyer has provided a plausible and imaginative interpretation of this phenomenon. He presents a lucid and compelling argument that does not belittle or demonize its subjects. This is an important contribution to our knowledge of the relationship between religion and violence."—Martha Crenshaw, editor of Terrorism in Context

"In this important book Juergensmeyer argues that the violence associated with religion is not an aberration but comes from the fundamental structures of the belief system of all major religions. Juergensmeyer has achieved what very few scholars can do with much success, providing an insightful analysis of the function of religion in national and international life while moving in broad sweeps from culture to culture and continent to continent."—Ainslie T. Embree, former cultural attaché, United States Embassy, New Delhi

"Half of the world's thirty most dangerous terrorist groups claim religion as their motivation. How can the word of God sanction acts of terror against human beings ? How can violence become a sacred duty ? These are the questions at the heart of Mark Juergensmeyer's calm, lucid, insightful and compassionate book. What sets it apart is Juergensmeyer's dedicated attempt to talk to former terrorists and work his way into their state of mind. His book shines light on the dark places from which terror springs." — Michael Ignatieff, author of The Warrior's Honour: Ethnic War and the Modern Conscience

Mark Juergensmeyer is Professor of Sociology and Director of Global and International Studies at the University of California, Santa Barbara. He is the winner of the prestigious Grawemeyer Award for 2003 in the religion category and the author of The New Cold War? Religious Nationalism Confronts the Secular State (California, 1993), and Gandhi's Way: A Handbook of Conflict Resolution (California, 2002), and editor of Global Religions: An Introduction (2003).

1. Terror in the Mind of God: The Global Rise of Religious Violence, 3rd Edition (Comparative Studies in Religion and Society, Vol. 13)

2. Terror in the Mind of God: The Global Rise of Religious Violence (Comparative Studies in Religion and Society)

3. Terror in the Mind of God: The Global Rise of Religious Violence (Comparative Studies in Religion and Society)